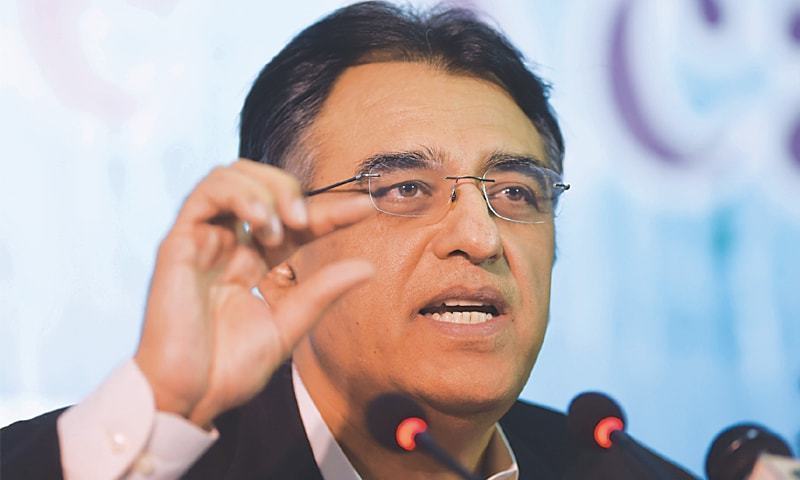 Federal Minister for Planning, Development and Special Initiatives Asad Umar said on Wednesday that a total of 2.1 million Covid-19 vaccine doses had been administered in Pakistan — over 100,000 of which were administered on Tuesday (yesterday) alone.

The federal minister posted on Twitter that “daily vaccinations crossed 100,000 in a day for the first time yesterday.

“Good to see more people registering,” he said, and further encouraged people above 40 years of age to register themselves for vaccination if they hadn’t done so already.

The National Command and Operation Centre (NCOC) had decided on Monday to open registration of around 12m people in the age group of 40 to 50 years and allow walk-in vaccination facility for citizens over 50 years of age. Umar had said that people who were 40 years and above could get themselves registered for vaccination from Tuesday.

Special Assistant to the Prime Minister on Health Dr Faisal Sultan also said that more than 117,000 vaccine doses had been administered in one day on April 27.

He also provided a snapshot of received and expected arrivals of Covid-19 vaccines in Pakistan and said that 78 per cent of the total number of vaccines up till June had been purchased by the government.

Umar had previously said in April that 1.3m Pakistanis had been vaccinated at government facilities.

“I want to tell you that more than 0.8m vaccine doses have been administered in Pakistan and we want to take this campaign further and speed it up,” Dr Sultan had given an update on the vaccination drive on March 31.

Pakistan kicked off its vaccination drive in early February with Professor Rana Imran Sikander becoming the first doctor to be vaccinated against the disease at the Prime Minister Office in the presence of Prime Minister Imran Khan.

The prime minister had said at the occasion, “I congratulate my team which has worked prom­ptly and vaccine was imp­orted. We are also thankful to China which has provided vaccine.”

He said he was “very happy” to see the federal minister’s tweet and addressing the federal government, said that the figure had been achieved due to “removing restrictions” on the age groups which could be vaccinated.

“We said again and again as a government and as citizens that age restrictions should be finished and you should provide vaccine to whoever wants to vaccinate themselves.”

He questioned why were other citizens who wanted to be vaccinated were being “deprived” despite vaccine availability.

“I will want to appreciate a good development that 117,000 Pakistanis were vaccinated and will want to request the federal government to remove the age restriction,” he said, calling for people above 18 years of age to be granted the permission to achieve vaccinations.

Wahab also called upon the government to sort out supply issues for the Covid-19 vaccine and ensure its availability in the markets and government hospitals. He appreciated that a special flight of PIA had been sent to China to bring back vaccines and said there was further need for the federal government to send more similar flights.

He also stressed upon the importance of following standard operating procedures (SOP) to prevent further spread of the disease and said that “collective thinking” and “synergy” were needed to ensure that the maximum number of the population could be vaccinated.

‘Winning the war against Covid-19 is the only option’

Punjab Chief Minister Usman Buzdar while addressing a press conference in Lahore said that so far 1m people had been vaccinated in Punjab, adding that the government had increased the number of vaccination centres in the province.

He said that the Punjab government has allocated Rs1.5 billion for the purchase of Covid-19 vaccines and “these are difficult circumstances but we are committed to tackling this national challenge.”

The chief minister urged people to follow SOPs for their own as well as their family’s protection. “Support the government in these unusual circumstances so your lives can be protected.”

“Winning the war against Covid-19 is the only option. Every segment of society will have to fully play their role in dealing with the coronavirus.”

CM Buzdar said that his government had also decided to impose more stringent restrictions in cities where the positivity rate was higher than 8pc. He added that the government would also ensure the continuous provision of oxygen supply and legal action will be initiated against hoarders and profiteers of oxygen cylinders.