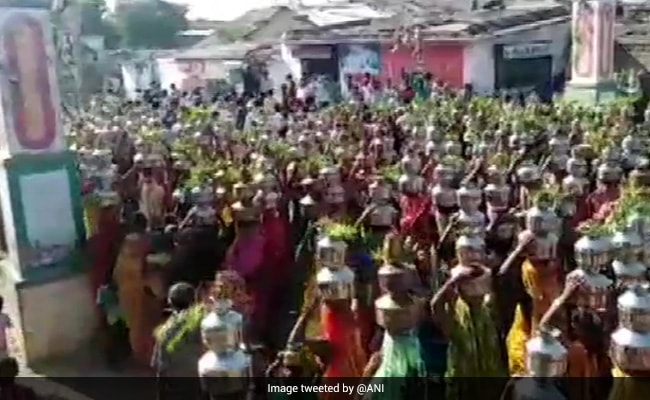 Around 100 men and women, many without masks, were seen participating in a procession.

Police have arrested 46 people for taking out a religious procession at a village in Gandhinagar district to “eradicate coronavirus”, an official said on Thursday.

This is the second such incident in Gujarat in the last few of days.

All COVID-19 prevention norms were allegedly violated during the latest procession taken out in Raipur village of Gandhinagar on Wednesday, Deputy Superintendent of Police MK Rana said.

In a video that went viral on social media platforms on Thursday, around 100 men and women, many without masks, were seen participating in a procession in the village.

While women were carrying water pots on their heads, several men were leading the procession while beating drums.

“After being alerted about the incident, we have arrested 46 men involved in taking out the procession,” Mr Rana said.

A section of people from the village believed coronavirus could be eradicated by pouring water on a local temple of their deity, he said.

All the 46 accused were booked for violating police notification regarding gatherings under section 188 of the Indian Penal Code and provisions of the Disaster Management Act and the Epidemic Diseases Act, the official said.

On May 3, a similar incident took place at Navapura village in Ahmedabad where a large number of women carrying water pots on their heads took out a procession to a local temple, believing that pouring water on the temple would eradicate COVID-19.

Police had arrested 23 people, including the village sarpanch, for organising the event.

The Gujarat government has already imposed a ban on all kinds of gatherings in the state in the wake of a surge in coronavirus cases.

On Wednesday, Gujarat reported 12,955 new coronavirus cases, raising its tally to 6,33,427, while 133 fatalities pushed the death count to 7,912, as per the state health department.