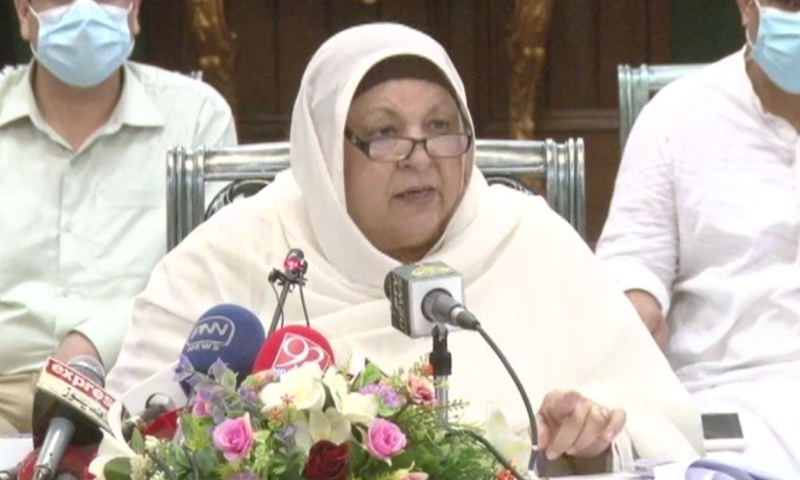 Punjab Health Minister Dr Yasmin Rashid said on Sunday that almost all ventilators in Gujranwala were occupied while the occupancy rate in Lahore was 81.5 per cent, adding however, that the health department was making efforts to shore up facilities.

She provided the details during a press conference held in Lahore to update the public regarding the coronavirus situation in the province.

Giving details of healthcare facilities, Rashid said that there were 2,730 beds in district headquarters hospitals (DHQs) in Punjab of which around 600 were currently occupied. There were 97 ventilators in the DHQs of which 20 were in use, she added.

“All facilities and human resources are available,” she assured.

The minister said that the infectivity rate in Lahore, which had been significantly high previously, had now been reduced in comparison to other cities for which she credited the district administration’s efforts to ensure strict compliance with standard operating procedures (SOPs).

“There is a lot of noise that the conditions in Lahore are bad,” Rashid said, sharing that 30 areas of the city were under smart lockdown.

She said that the provincial government had provided 50 ventilators to public sector hospitals in Lahore, stressing that “there has been no interruption in oxygen, no problem was created.”

Rashid said that 280 beds had been added to the high dependency unit (HDU) at Lahore’s Expo Centre while 10 ventilators were also being added as a “backup option” in case the city’s hospitals were strained.

“If we have a problem right now, it is Gujranwala,” she said where almost 100pc of the ventilators were occupied.

Talking about the health department’s efforts to tackle the situation, she said that five ventilators had been sent to the city while ambulances equipped with ventilators were also being prepared to transport patients from Gujranwala to Lahore if needed.

In addition, private sector hospitals would also fix charges for Covid-19 treatment so there would be no complaints, Rashid said.

Moving on to other cities, the health minister said the ventilator occupancy rate in Multan stood at 88pc, followed by Sargodha at 80pc, Bahawalpur at 52pc, Dera Ghazi Khan at 39pc and Faisalabad at 38pc.

She clarified that there was no problem in meeting the province’s oxygen demands. “Rawalpindi Institute of Cardiology generates its own oxygen to fulfil its need. The cabinet committee has given us permission to get oxygen generators for the future,” she said, adding that the procurement process for teaching hospitals had already started.

Rashid said the industry had also assured the government that there would be no obstacle in diverting oxygen to hospitals.

Talking about the availability of medicines, Rashid said Actemra — an injectable drug used to treat critically ill Covid-19 patients — was “freely available” and had been used for 956 patients so far.

She said the government was starting a study on anti-viral drug Remdesivir to find out its effectiveness in treating Covid patients. The study would be carried out in three hospitals — Pakistan Kidney and Liver Institute, Mayo Hospital and Jinnah Hospital — and the results would be shared with the media after the trials were completed.

Punjab ahead of all provinces in vaccination

Rashid said Punjab was “ahead of all other provinces” when it came to administering the coronavirus vaccines, adding that 78,000 doses were administered on Saturday.

She said that there had been an increase in the number of people wanting to get immunised since the government allowed walk-in vaccinations for people aged 50 to 59.

Around 219,000 healthcare workers (HCWs) have been vaccinated so far, the minister said, adding that the government was setting up a separate centre to vaccinate private-sector HCWs.

She shared that the National Command and Operation Centre (NCOC) directed the province to increase its facilities so up to 80,000 people could be vaccinated daily.

“Our total vaccination centres right now are 135. We are adding seven more, three in Lahore and other big cities like Multan, Faisalabad, Rawalpindi and Gujranwala.

“The vaccines available are [from] Sinopharm, CanSino and Sinovac. We received 2.1 million doses, we have 0.82m right now. There is no problem regarding vaccines because according to our information, the [federal] government is receiving 2m vaccines before May 10 of which a big portion will be given to Punjab.”

She disclosed that the Punjab government had also started the bidding process for procuring vaccines which would be completed on May 11 and it was expected that the vaccines would be received in a month.

Rashid said the province has its own gene-sequencing system. “I talked to our molecular biologist today morning who informed me that 90pc of our cases are of the British variant and 10pc are the strain from Wuhan.”

She refuted reports that the Brazilian and South African variants had spread in the province. “Two patients were identified [as having the variants], one from Islamabad and the other from Mianwali. Their contact tracing was done and no other person tested positive.”

She also denied reports that the vaccines were not effective against the UK variant of the novel coronavirus.

“Let me be clear, the vaccine we are giving, the Chinese vaccine we are administering, has been approved globally. These vaccines are completely effective against the UK variant. The basic configuration of coronavirus will remain the same. When mutations come, they will be studied, because it is a rapidly evolving virus.”

She said the reports had caused a hindrance in the province’s vaccination process because people became worried after hearing them. “We should not give the impression that they are not effective. They are extremely effective against these variants and if something changes, we will never hide it from you.”

“We expect in the next two to three months, the situation will improve,” she concluded.