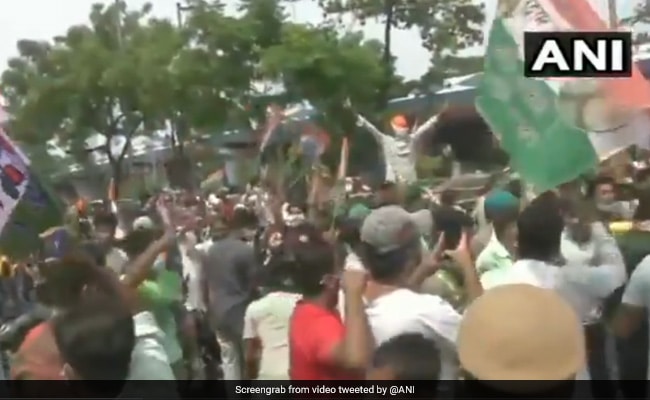 Trinamool Congress supporters in large numbers gathered outside the BJP office in Kolkata.

The Election Commission has urged all states and Union Territories to ensure that no victory processions are held by political parties as leads indicated winners in five states.  Videos from Kolkata have shown celebrations by Trinamool supporters in pockets of Kolkata and some rural areas.

Hundreds of mask-less supporters, faces smeared in green, were seen waving flags outside the party office — a dangerous situation in a state where Covid is threatening to spill out of control.  Similar celebrations were seen in rural areas.

Celebrations were also held by supporters of the DMK in Tamil Nadu — where the party is set to come back in power after a decade.

Pointing out that the situation has been brought into its notice by media reports, the Commission, in its letter to the Chief Secretaries of all states and Union Territories, said such activities “must be prohibited urgently”.

“The Commission has viewed it very seriously and again directed that all necessary actions must be taken to ensure the strict compliance of its directions wherein all such activities have already been prohibited in view of the pandemic,” the Commission said in its notice.

The Commission has further asked that the “responsible SHOs and other officers must be placed under suspension immediately and criminal/disciplinary actions must be initiated against them”.

There have been concerns that political rallies might become Covid super spreader events since the elections in five states were announced. The situation was particularly critical in Bengal where the Commission had announced an unprecedented, massive, eight-phase election.

The Madras High Court has sharply criticised the Commission’s handling of the elections in five states. On Monday, the court had said the Election Commission was “singularly responsible for the second wave of Covid”. “Your officers should be booked on murder charges probably,” the judges had observed.

The wife of a Trinamool Congress candidate who died of Covid, has filed a murder case against the Election Commission.  Kajal Sinha, the party candidate from Khardah, died on April 25. His wife Nandita Sinha has now accused Deputy Election Commissioner Sudeep Jain and other officials of “careless and negligent” behaviour that led to the death of husband and several other candidates.