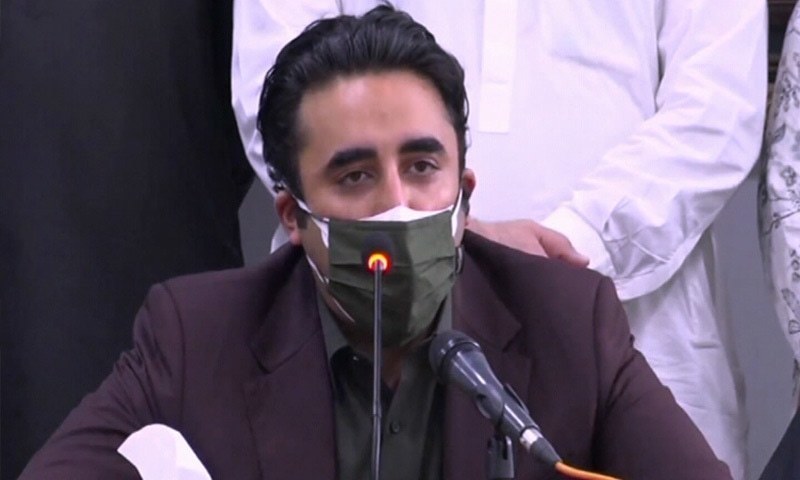 PPP Chairman Bilawal Bhutto-Zardari said on Friday that he had taken notice of reports of villagers being evicted by employees of Bahria Town and law enforcers in Karachi and demanded a report on the matter.

Addressing a press conference in Karachi, Bilawal said he had busy on Thursday (yesterday) in the election campaign for the NA-249 by-poll but there were a lot of reports on the issue on social media and “complaints coming of injustice”.

He said he had told Sindh Chief Minister Syed Murad Ali Shah: “I’ve taken notice of the issue and a report should be given to me. All work which is going on there should be immediately stopped until the report doesn’t arrive.”

A day earlier, social media was abuzz with reports that employees of Bahria Town, aided by Sindh Police personnel, were forcefully evicting residents from their lands.

Qaumi Awami Tahreek President Ayaz Latif Palijo announced a protest in response to what he said was the “demolition of villages in Karachi by Bahria [Town] and the [provincial] government and injuring hundreds of people, including women.”

Academic and activist Ammar Ali Jan had posted on Twitter that amid the coverage for the NA-249 by-elections, no attention was being paid to the “violent eviction of thousands of native villagers to appease Malik Riaz. This is ‘democracy’ of Bahria Town, by Bahria Town and for Bahria Town”.

“These are scenes from Karachi. This is happening during Ramazan. There should be nation-wide protests to force [the] Sindh government to halt this operation,” he had said.

The PPP chairman said the Supreme Court’s (SC) decision was in front of everyone and neither he nor anyone else wanted to commit “contempt of court”.

“We definitely want to focus on this that there’s no injustice with anyone and especially if injustice has happened in yesterday’s incident then action should be taken against those who supported this injustice,” he said, adding that the affected people should get their rights and money according to the SC decision.

Bilawal claimed that not “one rupee” from the SC decision had been spent on the people of Malir and the PPP had been repeatedly requesting that “Malir and Sindh’s money should be spent on Sindh. This is Sindh’s money.”

The SC had accepted Bahria Town Karachi’s Rs460 billion offer for the lands it occupied in the Malir district of Karachi and restrained the National Accountability Bureau from filing references against it in March 2019.

It had then formed a high-powered commission to oversee the disbursement and utilisation of funds deposited by Bahria Town Karachi in October 2020. “The commission shall propose and suggest projects for public utility, including but not limited to health, education, infrastructure etc, for the people of Sindh,” it had sad.