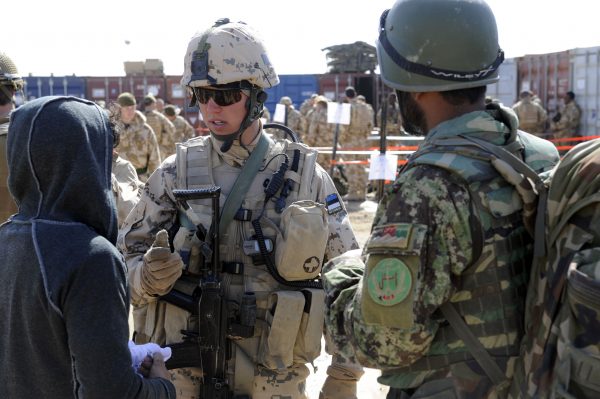 It is not yet clear whether President-elect Joe Biden will stay on course with President Donald Trump’s decision to withdraw troops from Afghanistan, or whether he will leave behind a small counterterrorism force. Unfortunately, both options are flawed. Withdrawing from an Afghanistan engulfed in civil war where the Taliban is stronger than before, and where Islamic State and al-Qaeda are implanted, will lead it to become an international terrorism harbor once again. But leaving a small counterterrorism force will not deter it from becoming a most serious threat to the United States either.

The capacity of a small military force at 2,500 personnel or under will need to be used toward protecting its own assets, and its maneuvering will be severely limited. But more important is the fact that relying solely on a counterterrorism strategy in Afghanistan has been detrimental to bringing stability to the country. While General David Barno, General Stan McChrystal, and General David Petraeus tried to implement a counterinsurgency strategy, which put a special emphasis on the local population, Ambassador Karl Ikenberry, then in his capacity as commander, Combined Forces Command-Afghanistan, decided to concentrate on a counterterrorism strategy, which actually resulted in greater civilian casualties and profoundly hurt American and NATO forces in the view of the local Afghan population.

Of course, Eikenberry does not hold the blame for the failed implementation of counterterrorism in Afghanistan. Neither are Barno, McChrystal, or Petraeus responsible for the limits in the gains of counterinsurgency. Without sufficient forces on the ground, the alternative is to use airpower. But a military strategy for an unconventional war waged in a foreign nation that is overly dependent on air-power, and where one of the objectives should be to drive support away from the insurgency, is deeply flawed. Of course, without a large number of conventional forces, the option left over is to use special forces, and air support is critical to their operations.

But their interpretation of the Soviet intervention of Afghanistan was incorrect. The Soviets invaded to support a regime that was already deeply unpopular with the Afghan population. On the other hand, the support from the Afghan population to the Taliban in 2001 was much weaker than the support held by the Afghan government when the Soviets invaded. Indeed, President Mohammed Daoud Khan led a weak political structure, and the actions of the Communist Party had placed it on a collision course with the rural sectors of the country. This had led to an increase of fundamentalism. In the 1970s, fundamentalist movements took shape across the region, and gained force in Afghanistan after Daoud’s modernization policies, which clashed with Islam and the traditions of the nation.

When Nur Muhammad Taraki took over, his secular project further deepened the wounds in society. In response, the mullahs declared jihad against the Communist regime, and insurgencies grew in different parts of the country. But these movements, of different tendencies, had been mobilizing for more than a decade, first against Daoud and then against the Communist Party. In fact, when President Nur Muhammad Taraki requested Soviet aid after the insurrection in Herat, he told the Soviet Politburo that no one supported the government anymore. The fundamentalist movements had been underestimated by the Afghan government and were well trained and armed in and by Pakistan.

So when Washington was planning the invasion of Afghanistan in 2001, the Bush administration relied on an incorrect interpretation of Afghan military history. The Soviet military was not responsible for swinging the population toward the insurgency, and therefore Washington’s fear that a huge U.S.-led force would lead to an unsuccessful intervention was unfounded. Still, this fear prevented the success of a military intervention in Afghanistan and limited the capacity of coalition forces to engage the enemy.

Instead, the real reason the Soviet military was defeated in Afghanistan had been due to the lack of sufficient forces, which restricted their presence and offensives to urban areas. Therefore, the Soviets could only perform sporadic incursions to rural zones, which they could never occupy or secure. Since Afghanistan is a rural country, this then meant that Soviet counterinsurgency was ignoring a great section of the population. Since the Bush administration opted for a light footprint, this same mistake was repeated by the United States and NATO.

Another reason why the Soviets failed was because some Soviet leaders ignored the fact that counterinsurgency is a long-term strategy. In fact, General Secretary Leonid Brezhnev told Soviet Ambassador to the U.S. Anatoly Dobrynin in a letter at that time: “Do not worry Anatoli, this war will be finished in three or four weeks.” Both the Bush and Obama administrations also failed to understand that the actions they were taking would not show results in a short period of time. In fact, even when the Obama administration increased troop levels to support a stronger counterinsurgency strategy, it made a severe mistake by simultaneously attaching to it a deadline on their return. This sent the Taliban a clear message: Once we move out, you can continue to operate in the area.

The Bush administration also called for a light footprint because it believed that it should be the Afghans who pursue the execution of security and reconstruction in Afghanistan, while the United States and NATO assisted them. This was the same approach the Clinton and Bush administrations had taken toward Colombia. But unlike Colombia, which now enjoys security and stability, there was no Afghan infrastructure that would enable that approach. Security arrangements were therefore made with tribal leaders and warlords, giving them further autonomy, leading to the marginalization of many Afghans qualified to govern and sidelining the authority of Kabul.

When NATO took over, it divided Afghanistan between each member state, and there was a severe lack of coordination between them. NATO’s strategy was plagued by the national caveats that further prevented its success. In Helmand, the British established posts across the province to interact with the population and confront the insurgency. But these posts were so small and isolated they were being overrun by both insurgents and tribes. The coalition forces negotiated with tribal leaders so they would perform security functions and block the return of the Taliban. But many of these Pashtun tribes supported the Taliban, who were against the eradication of the opium fields and the extension of authority of Kabul. In order not to create tensions with the tribes, the NATO-led military mission was given restrictive rules of engagement, which limited their capacity to respond to enemy attacks.

Under the strategies of counterinsurgency, NATO and the U.S. were always able to expel insurgents from areas, but they never had sufficient forces to occupy those areas and even less to guarantee the conditions for reconstruction and development projects and the sovereignty and authority of Kabul. This made support from the local population to the United States, NATO, and the Afghan government difficult, as they feared retaliation from the Taliban after a counterattack.

For Afghan locals in the crucial rural regions the message was always clear: The International Security Assistance Force was the visitor, while the Taliban was the resident.

Carlo J.V. Caro is a researcher on U.S. foreign relations and terrorism. He holds masters degrees in both Security Studies and Islamic Studies from Columbia University.