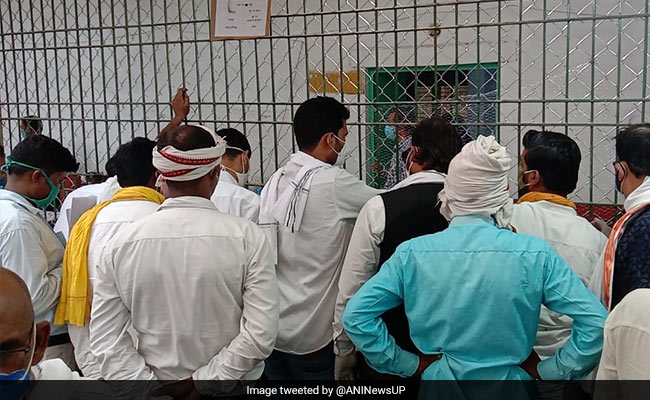 Polling for the four-phased panchayat elections in Uttar Pradesh ended on Thursday.

Counting of votes for Uttar Pradesh’s panchayat elections, questioned by many for taking place in the middle of an unprecedented coronavirus crisis, began on Sunday morning alongside that for the closely watched polls in West Bengal and other states.

The process began a day after the Supreme Court refused to put it on hold and the State Election Commission (SEC) said the candidates and their agents will be allowed to enter the counting centres only if they have tested negative for COVID-19 in the 48 hours prior to the commencement of the counting process or taken both doses of the vaccine.

Despite assurances of the election body that COVID-19 rules will be strictly followed, scenes from counting centres on Sunday morning showed social distancing and mask-wearing rules being violated in several districts.

The urgency of the rural polls had been questioned amid the massive spike in coronavirus cases that have swamped hospitals and crematoriums and a petition from a teachers’ body that said 700 teachers had died while they were on duty during the four-phased elections.

A curfew will be imposed in areas near the 800 counting centres and no victory rallies will be allowed in UP after the results are out, the court was assured by the poll commission, which also said that senior officials will ensure that COVID-19 protocol is followed. The Supreme Court directed the officials to save the CCTV footage of all the counting centres.

Citing the frightening Covid spike in the state, the top court had earlier asked the state election commission if it could delay the counting. “Despite the situation, you need to go ahead? Can you have it after two weeks so that the medical facilities can be improved?” the court said.

Polling for the four-phased panchayat elections in Uttar Pradesh ended on Thursday.

Opposition leaders have hit out at the Yogi Adityanath government over the death of teachers who were on poll duty. Congress leader Priyanka Gandhi Vadra slammed the state government in a series of tweets.

“These elections have been conducted in almost 60,000 gram sabhas of UP without any thought of the catastrophic onslaught of the second wave… What is happening in UP is nothing less than a crime against humanity and the CEC is playing along,” she said.

Uttar Pradesh’s coronavirus caseload swelled to 12.5 lakh with 34,372 cases reported on Saturday. The state, widely believed to be underreporting the scale of the crisis, has the fourth highest number of cases in the country after Maharashtra, Kerala and Karnataka.