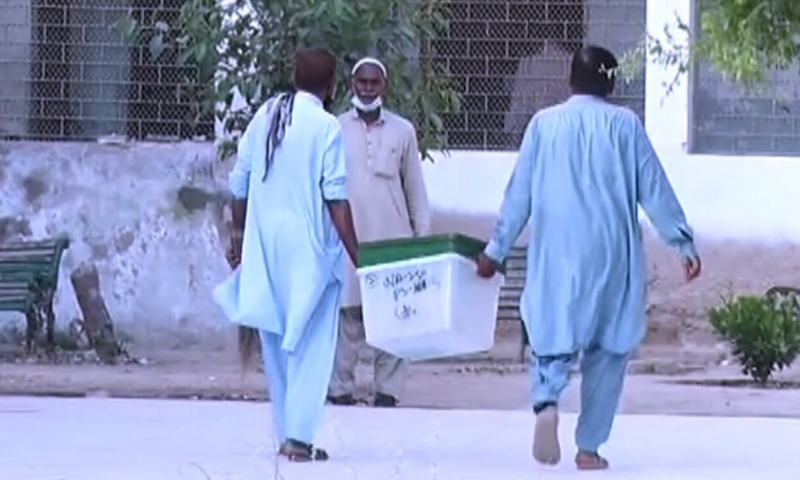 The counting process for the NA-249 by-election in Karachi began on Thursday as a tough contest was expected among major parties vying for the seat in one of the city’s most ethnically diverse constituencies.

According to media reporters, the voter turnout remained disappointingly low in most polling stations across the constituency, despite the hype created around the election for the past few weeks.

The seat had fallen vacant after PTI’s Faisal Vawda resigned over his dual nationality controversy and became a senator.

According to Radio Pakistan, 276 polling stations comprising 796 polling booths have been established in the constituency. The voting process, which began at 8am, continued till 5pm without any break.

A tough contest is expected among the candidates of major political parties contesting the by-election.

“The supra member of the provincial assembly is visiting the constituency, along with workers, and creating inconvenience for voters,” the letters said.

“Further, it may also be ensured that no any sitting MNAs/MPAs/senators/ministers and other public office bearers from any group or party may not be allowed to visit area falling under the territorial jurisdiction of NA-249 Karachi where the poll process is being held,” they said.

In addition, PPP Central Election Cell In charge Taj Haider wrote to the chief election commissioner, claiming that around 50 voters were not being allowed to cast their ballots at the Polling Station A-1 School.

“This is a combined polling station. However, male voters are not being allowed. You are requested to kindly take notice and do the needful under the law,” he said in the letter.

‘PTI ahead in all polls’

Meanwhile, Information Minister Fawad Chaudhry said that all surveys had shown the PTI to be ahead of all other parties in the Karachi by-poll, adding that it would be the PTI’s day.

In a statement, Leader of the Opposition in the National Assembly Shehbaz Sharif appealed to the people of the constituency to step out of their homes and exercise their “constitutional and democratic” right to vote.

He said that by exercising their right to vote, citizens could elect competent representatives that would fulfill the promises made to the people.

He assured those that cast their votes for Nawaz Sharif, Miftah Ismail or the PML-N that their basic issues would be resolved.

“I am confident that you will make the right decision, as you did in the past, and will play your part in helping to deal with the myriad of problems plaguing the country,” he said. He also urged caution in light of the current coronavirus situation, and told voters to wear a face mask.

The ECP has asked the presiding officers to send pictures of Form-45 in the presence of polling agents of the contesting candidates to the returning officers. It directed them to keep the location of their smartphones on while taking the picture.

The commission has also directed the POs not to wait for submission of the results if the network is down, and pointed out that in such a case they should immediately reach the returning officer’s office and submit the polling record.