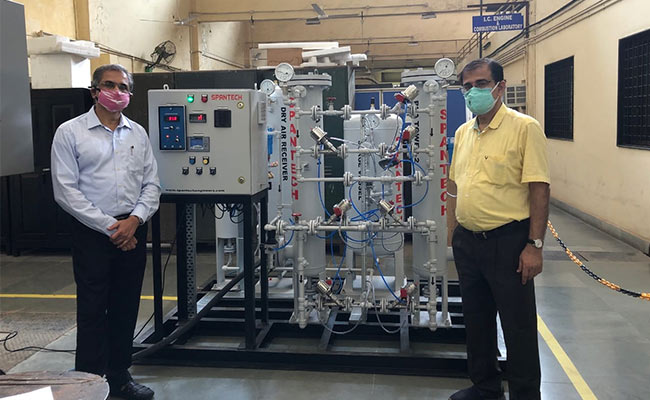 The oxygen production could be achieved with 93-96% purity, an official statement said.

Amid the shortage of medical oxygen for treating COVID-19 patients, the IIT Bombay has come up with an ingenious solution to help address the issue by converting a nitrogen unit into an oxygen generating unit, the institute said on Thursday.

The pilot project, which has been tested successfully, relies on a simple technological intervention of converting a Pressure Swing Adsorption (PSA) nitrogen unit into a PSA oxygen unit, according to an official statement.

It claimed that initial tests conducted at the Indian Institute of Technology (IIT) Bombay have shown “promising results”.

The oxygen production could be achieved at “3.5 atm pressure with a purity level of 93 per cent to 96 per cent”, the statement said.

This gaseous oxygen can be utilized for COVID-19-related needs across the existing hospitals and upcoming COVID-19-specific facilities by providing a continuous supply of oxygen, it said.

“It (conversion of nitrogen unit into an oxygen unit) has been done by fine-tuning the existing nitrogen plant setup and changing the molecular sieves from Carbon to Zeolite,” the statement said quoting Prof Milind Atrey, Dean (R&D), IIT Bombay, who led the project.

Mr Atrey said such nitrogen plants, which take air from the atmosphere as raw material, are available in various industrial plants across India.

“Therefore, each of them could potentially be converted into an oxygen generator, thus helping us tide over the current public health emergency,” he said.

The pilot project is a collaborative effort among IIT Bombay, Tata Consulting Engineers and Spantech Engineers, Mumbai, who deal with the PSA nitrogen and oxygen plant production, the statement said.

To undertake this study on an urgent basis, an MoU was signed among IIT Bombay, Tata Consulting Engineers and Spantech Engineers to finalise a standard operating procedure (SOP) that may be leveraged across the country, it said.

IIT Bombay Director Prof Subhasis Chaudhuri congratulated all the involved parties and said such partnership between academia and industry is “highly” desirable and essential for the growth and success of the nation, it added.

(This story has not been edited by NDTV staff and is auto-generated from a syndicated feed.)