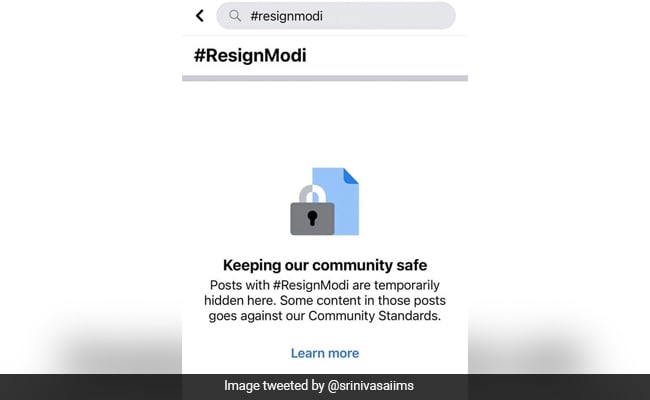 The government also referred to what it called a “completely fake and manufactured” report on March 5.

A Wall Street Journal report that alleged that the temporary blocking of the hashtag #ResignModi was an attempt to curb public dissent is “misleading” and “mischievous”, the government said today, emphatically denying that it directed Facebook to do so.

“A story by Wall Street Journal attributing removal of a certain hashtag by Facebook to GOI’s efforts to curb public dissent is misleading on facts and mischievous in intent,” the government said in a statement on the report titled “Facebook Blocks, Then Restores, Content Calling on Indian Prime Minister Modi to Resign”.

“The government has not issued any direction to remove this hashtag. Facebook has also clarified that it was removed by mistake,” it said.

The government also referred to what it called a “completely fake and manufactured” report on March 5 in the Wall Street Journal.

“It is pertinent to mention that on 5th March 2021 also, Wall Street Journal had published a fake news with heading – ‘India Threatens Jail for Facebook, WhatsApp and Twitter Employees’. Government had sent an official rebuttal of this completely fake and manufactured story to Wall Street Journal,” the statement said.

“Media has a very important role to play in acting as a force multiplier to the efforts of our front-line workers and medical professionals. At a sensitive time like this, we would urge the media to partner with crores of ordinary Indians as we collectively fight the pandemic.”

Posts tagged #ResignModi, mostly critical of the government’s handling of a Covid explosion that has overwhelmed hospitals and stretched resources, were blocked for several hours before they were restored. The block, hours before the last round of voting in Bengal, affected posts calling for Prime Minister Narendra Modi’s resignation over the nationwide Covid crisis.

Facebook said it barred the hashtag by mistake. “We temporarily blocked this hashtag by mistake, not because the Indian government asked us to, and have since restored it,” a spokesperson of the social networking site said.

The Centre had recently asked Twitter to remove around 50 posts, which, according to the government, were spreading misinformation about Covid. This move was criticized and the government was accused of arm-twisting the site to remove content critical of its policies.

Earlier this year, the government put out rules that require social media sites to take down content labelled offensive or illegal within a time-frame and bar content seen to affect “the sovereignty and integrity of India” and threaten national security.

India has reported more than 300,000 new daily Covid cases for a week. Today, the number of cases in 24 hours hit a record 3.79 lakhs, with 3,645 deaths. On social media, people have been reaching out to others for help with hospital beds, oxygen or medicines. Influencers and prominent people have been helping by amplifying the posts.