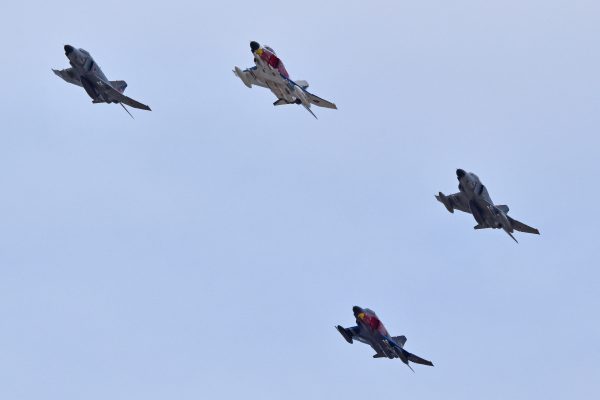 The Japanese archipelago lies in a volatile region rife with historical tensions and territorial disputes. China’s defense spending has increased at a double-digit rate annually for much of the past three decades. The People’s Liberation Army (PLA) has drastically modernized its air capabilities with development of the J-20 fighter and the upcoming FC-31, and has demonstrated consistently assertive behavior, including airspace violations and military buildups in the South China Sea.

North Korea, a nuclear power since 2006, has also shown belligerence by firing ballistic missiles into the Sea of Japan, while Russia has violated Japanese airspace on several occasions prompting Japan to scramble its F-15J fleet.

Japan’s 200-plus-strong F-15J fleet, built under license by Mitsubishi Heavy Industries, has been the backbone of Japan’s air superiority for close to 40 years. Nonetheless, they face some obsolescence issues that have led the Japanese defense ministry to purchase a $4.5 billion upgrade package to modernize 98 of them into a “Japan Super Interceptor” configuration equipped with better radar, avionics, and weaponry.

The F-2 program, co-developed with Lockheed Martin, has been facing operational challenges and has a staggering unit cost of $170 million. Even though the last F-2 was delivered in 2011, the program faces significant obsolescence issues and will remain in service for a shorter duration than the F-15J.

Given the dynamic geopolitical environment Japan finds itself in, the Japanese defense ministry is determined to fill the capability gap created by the old F-15J and the future retirement of the F-2. It has decided to purchase its first batch of 42 F-35As, destined to replace the aging F-4, followed by a second batch comprised of 63 F-35A and 42 F-35B fighters, worth $23 billion.

The F-35 is a formidable addition to Japan’s military apparatus: it offers stealth, excellent sensor and networking capabilities,and an ability to fuse real-time information for rapid decision-making rather than high speed and pure dogfighting capabilities.

From a traditional standpoint, the F-35 scarcely represents the air superiority platform the JASDF wants to counter China’s growing fleet of J-11 fighters, or even the more advanced platforms recently deployed by Beijing, such as the Su-35 or J-20. Japan has tried to acquire the F-22 from Lockheed Martin but ultimately failed to do so, given that the aircraft was not designed for export due to its sensitive technologies. The JASDF is still looking to acquire a stealthy, twin-engine, long-range air superiority fighter with a robust payload and advanced networking capabilities, which will provide Japan with a qualitative military edge over growing Chinese air capabilities.

Beyond the requirement of modernizing JASDF’s capabilities, maintaining a competitive defense industrial base has been a primary strategic goal for Japan. After the Second World War, Japan spent decades rebuilding its aerospace sector, building U.S. military aircraft under license, including the F-86, F-4, F-15, CH-47, and P-3. Building sophisticated aircraft under license has been Japan’s de facto strategy to acquire new technologies and upgrade its industrial base skills.

Japan has historically relied on U.S. companies to import military hardware through the Foreign Military Sales (FMS) framework. These imports have increased considerably in the last decade, its proportion of the country’s total defense budget rising from 0.9 percent in 2010 to 8.9 percent in 2019 with big-ticket items like the F-35, the MV-22, and the E-2D being procured through the government-to-government route. Outside of servicing those types of equipment, tier 1 and tier 2 domestic companies have not benefited from those FMS programs. Japanese companies face restrictions on sharing some critical software intellectual property and technical data from equipment that has originated in the U.S. original. Even Japan’s industrial participation in the manufacture of the F-35 has been a far cry from what the local industry had envisioned initially, when Japanese companies were seeking a larger role in the aircraft’s production. Recently, in a blow to U.S. military exports, the Japanese defense ministry has decided to scrap two major programs – the Global Hawk and the Aegis Ashore – due to some price and technical issues.

These developments may suggest that Japan is potentially reconsidering its engagement with the U.S. on military hardware and could utilize government funds instead for domestic development to enhance the competitiveness of its defense industrial base and, more importantly, gain full control of defense capabilities, as well as on future upgrades. According to the ministry of defense’s Acquisition, Technology & Logistics Agency, Japan is looking to leverage the technologies the industry has captured through license production, as well as the development of the experimental ATD-X stealth aircraft, for the development of an indigenous fighter, known as F-X. This would represent a shift in Japan’s long-term procurement strategy and could indicate that Japan is now looking to partner for the design and manufacturing of sixth-generation fighter aircraft technologies.

After former Prime Minister Abe Shinzo’s return to power in 2012, he stopped years of decline in defense spending by boosting investments modestly. After eight years of slow but steady increase, the Japanese defense budget stands at a record of about $51.6 billion with the FY21 budget request. In addition, the Japanese defense ministry decided to “convert” its Izumo helicopter destroyer into a small aircraft carrier capable of accommodating 12 F-35B jet fighters, which will strengthen Japan’s offensive capabilities. Following the lift of the ban on defense exports, Japan had seen last year its first successful military export, with the sale of air radar systems to the Philippines.

Japan would likewise welcome an opportunity to export the F-X, its future sixth-generation fighter, with the assistance of an international partner – if not to promote military ties with friendly nations, then in order to reduce the tremendous development cost. Of all the challenges the F-X program will face, its affordability will be the most pressing.

The F-X program represents a clear continuation of Abe’s robust defense doctrine and will further cement its legacy into Japan’s long-term military modernization. By bolstering the country’s domestic defense industrial base and by enabling technological transfer, the F-X program will help Japan catch up with China and Russia in the stealth fighter market.

Based in Asia for more than 10 years, Arnaud Sobrero is an independent writer focused on defense technology and East Asian affairs.