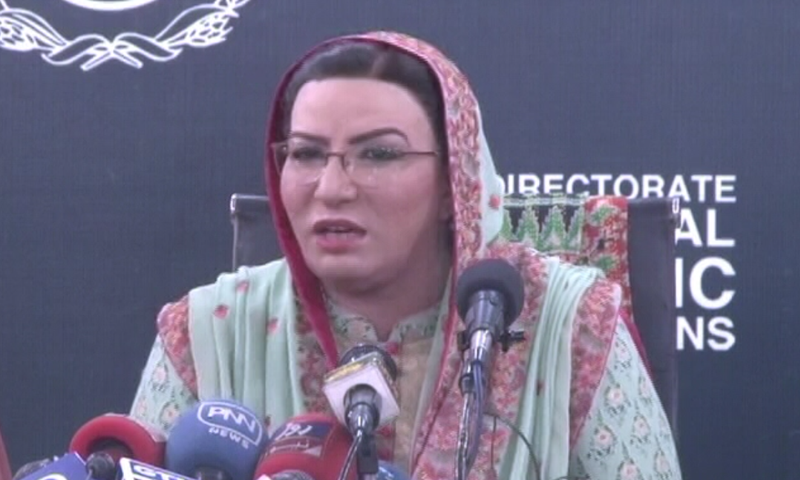 Special Assistant to Punjab Chief Minister (SACM) Dr Firdous Ashiq Awan claimed on Monday that people were “colouring” the Sialkot incident — in which she humiliated a female assistant commissioner in public during a visit to a Ramazan Bazaar — to “create conflict between government officials and public representatives”.

Addressing a press conference in Lahore, Awan disclosed that she decided to approach Prime Minister Imran Khan and Punjab Chief Minister Usman Buzdar for advice on how to handle the controversy.

She said she visited the bazaar to “fight for the people and not for a specific family”, adding that the people, who were “trying to colour the incident according to their own [interests]” instead of sympathising with the public in order to create a conflict between the bureaucracy and the government, would be disappointed.

Awan further said that the prime minister and chief minister had taken notice of the “chaos, substandard products and exploitation of people” in the Ramazan Bazaars.

Chief Minister Buzdar decided to hold an inquiry into the incident himself during a joint meeting with the provincial chief secretary and her and had also asked for a report, the SACM shared.

The chief minister also expressed displeasure at how people waited in long lines to buy sugar at Ramazan Bazaars, she added.

A day earlier, a video of Awan went viral in which she could be seen scolding AC Sonia Sadaf at a stall for ‘poor quality of fruit’.

“Where were you when I reached there?” the SACM shouted. “Since there was a great rush of people, I could not make it to the front row to receive you,” the AC replied but could not satisfy Awan.

“Have you come from the heavens. Is your life more precious (due to Covid factor) than that of those present here?” Awan shouted, giving the AC no time to reply.

For the young official, it was enough as she left the venue when the special assistant roared: “Who is the shameless person who has selected and posted you here? I will talk to him.”

Speaking about the incident in her presser today, Awan said that it was previously decided that tents would be put up in Ramazan Bazaars to protect people from the sun, fans would be set up and sofas would be provided for elderly citizens.

“If fasting people are given one kilogramme of sugar after standing in line for the whole day in some districts, it means that the government’s policy is not being followed,” she observed.

Awan claimed that some media persons present during her visit “twisted the narrative and presented an angle” that she was angry at not being given protocol.

In an apparent reference to AC Sadaf, she said that any woman who chose difficult work had to prepare herself for it.

“The person who cannot bear the heat after coming out from [an air-conditioned room] should not join professions associated with public service. They should take easier paths. The person who takes the difficult path should have the courage and the strength to face difficulties.”

The SACM said the people she was “fighting for” during her visit were not her relatives, from her constituency or from a specific political party. “We distributed sugar among them for free after purchasing from stalls so our government’s goodwill could be continued and the public could be given relief,” she added.

“The people who stand in line for sugar at Ramazan Bazaars are not [well-off]. The babus who are from royal families have no concern with those lines and they do not know the pain. That assessment can only be done by those who have to knock on doors for votes and the public has to make decisions according to their choice.”

Awan alleged that there was “mismanagement” at the Ramazan Bazaar, adding that “facts were changed and miscommunicated” to the chief secretary.

“I went to some 14 Ramazan Bazaars before this in Lahore [and] Gujranwala. I have also visited utility stores and I have never seen such an attitude,” she said referring to the assistant commissioner.

The SACM said that mistakes were only pointed out at places where problems existed but “adopting such an attitude in reaction to that is beyond understanding”.

She said she had spoken up for the rights of civil servants after a “Rajkumari of a royal family” — apparently referring to PML-N’s Rana Sanaullah — had called out the chief secretary and his entire team, threatened them and used bad language.

“I believe it is not anybody’s right to scare and threaten anyone working for the rule of law,” she added.

“We are important pillars of the government, we have to work in our circles of authority. The purpose of both (the bureaucracy and public representatives) is to give relief to the people,” she said, adding that she saluted the officers who stood in the heat in Ramazan Bazaars to further the government’s initiative.