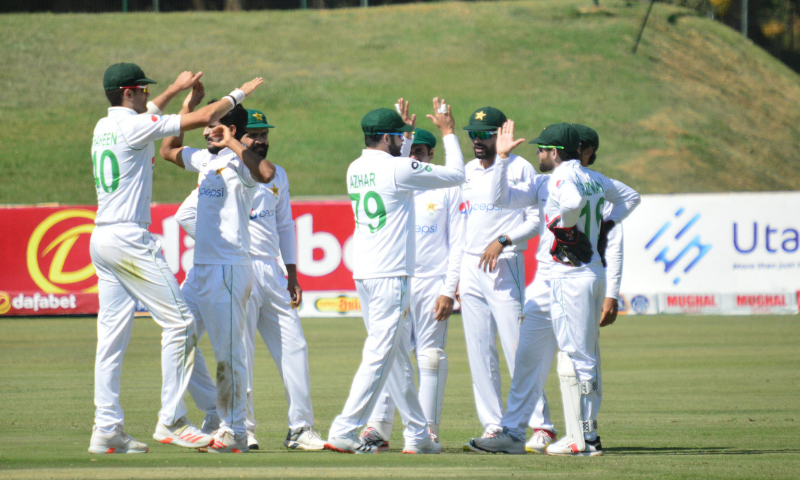 Pakistan pace pair Hasan Ali and Shaheen Shah Afridi shared eight wickets between them to dismiss Zimbabwe for 176 on the opening day of the first Test in Harare on Thursday.

Hasan rocked the top order with figures of 4-53 while Afridi polished off the tail with 4-43 as the home batsmen struggled to cope with the pace generated on a slow pitch at Harare Sports Club.

Debutant Roy Kaia stood firm in the post-lunch session, top-scoring with 48 before falling leg-before to Hasan while Donald Tiripano chipped in with 28 and Milton Shumba, also playing in his first Test, scored 27.

Zimbabwe, who won the toss and opted to bat, seemingly recovered when Shumba and Kaia lifted them from a precarious 30-4 with a stand of 59 but an unfortunate run out of Shunba put an end to the fight.

Shaheen reached 50 Test wickets by dismissing Tendai Chisoro before taking the last two wickets to wrap up the innings.

Zimbabwe were hit hard on the eve of the match when regular skipper Sean Williams was ruled out with a hand injury leaving the captaincy to Brendon Taylor.

Another experienced batsman Craig Ervin also failed to recover from a calf injury.

In the first session, Hasan struck twice to give Pakistan an excellent start.

Opener Kevin Kasuza played on to a Hasan delivery in the second over of the match while Shaheen had Prince Masvaure caught by Imran Butt at second slip for 11.

Left-arm spinner Nauman Ali came into the attack early and bowled Tarisai Musakanda through the gate for 11.

Taylor flashed rashly at a wide ball from Hasan outside off stump and a thick edge flew to Faheem Ashraf who swallowed up the chance.

The tourists are aiming to convert strong recent form in limited-overs cricket into the longer format, having already won one-day international and Twenty20 series in South Africa and a T20 series in Zimbabwe on this southern Africa trip.

Zimbabwe drew its last Test series against Afghanistan but hasn’t won a series since 2011. Pakistan comes off a 2-0 home series win over South Africa in February.