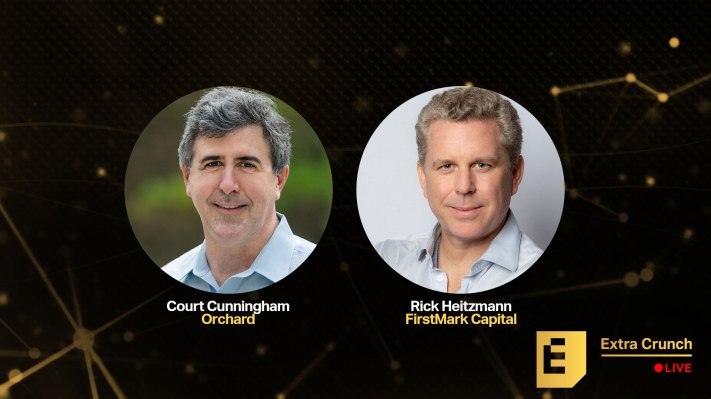 Orchard, founded in 2017, was relatively early to the proptech industry. The company, originally called Perch, focused on dual-trackers, which are folks who are both buying and selling a home simultaneously. FirstMark Capital led both the Series A and the Series B funding rounds for Orchard, doubling down on the real estate platform.

It goes without saying, we’re absolutely thrilled to have FirstMark Capital Managing Partner Rick Heitzmann and Orchard CEO Court Cunningham join us on an upcoming episode of Extra Crunch Live. The event takes place on May 5 at 3pm ET/noon PT. Register here.

Orchard has raised more than $350 million, including a $200 miilion+ debt financing. Alongside running a full brokerage company for dual-tracking home buyers and sellers, it also offers title and mortgage services. But what’s most interesting about the vertically integrated company is the innovation it’s doing around the consumer experience. Namely, Orchard is taking an entirely new approach to home searching, which has been incredibly stagnant despite the rush to digitize the process by major tech players.

Orchard allows consumers to get ML-driven recommendations based on homes they’ve already liked, and search by different rooms in the house. For example, perhaps the backyard or the kitchen is the most important part of the house — Orchard lets you default to that pic when browsing listings.

On Extra Crunch Live, we’ll talk more about what Heitzmann looks for in a founder, what he sees in Cunningham and the future of proptech, why Cunningham chose FirstMark and even take a walk through Orchard’s early pitch deck.

We’ll also look at pitch decks submitted by the audience, giving you the chance to hear directly from a founder and investor how they consume funding decks, what works and what doesn’t. If you want to submit your deck to be featured in a future episode of ECL, hit up this link.

It’s gonna be a blast.

As a reminder, anyone can attend Extra Crunch Live, but on-demand access to the content is reserved strictly for Extra Crunch members. You can join Extra Crunch here.