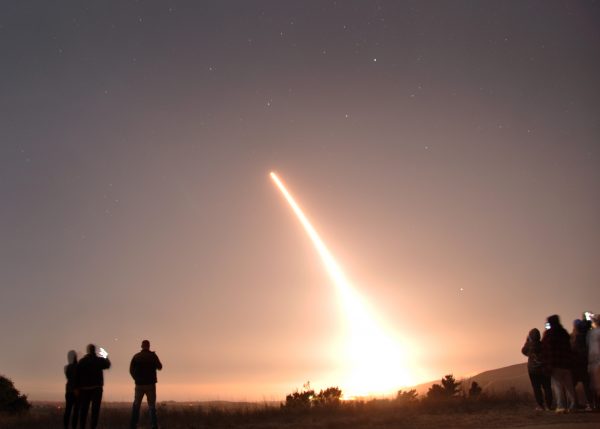 Writing for Breaking Defense on February 12, the commander of U.S. 20th Air Force, responsible for managing the three intercontinental ballistic missile (ICBM) wings, has made a case for continued nuclear weapons modernization as the United States seeks to meet an array of nuclear threats. In his article, Major General Michael Lutton asserted that “to be an effective deterrent force, U.S. nuclear forces must be modernized—the ICBM force, the bomber force, the submarine ballistic missile force and Joint All Domain Command and Control (JADC2) capabilities.”

Questioning those who argue that continued U.S. nuclear modernization could fuel an arms race, Lutton claimed that the “critics’ arguments don’t line up with the facts.” “[T]he size and age of the U.S. nuclear weapons stockpile is at the lowest level of warheads since the late 1950s, with the average warhead age being older than at any other time in history,” he writes.

The Trump administration had maintained a considerable accent on U.S. nuclear modernization efforts as part of what it described as great power competition with China and Russia as well as well as emerging nuclear threats. For fiscal year 2021, it had requested almost $46 billion in nuclear weapons spending, a significant hike from the previous year’s. As part of the FY 2021 budget request, the Trump administration revealed that it intended to create a new nuclear warhead for sea-launched missiles, in order to replace two existing ones that would require modernization over the next 15 to 20 years. The administration’s 2018 Nuclear Posture Review had also pushed for more low-yield “tactical” nuclear options. But it was the Trump administration’s outright disdain – and obduracy – toward arms control treaties that stood to seriously upset the nuclear balance.

To be fair to the administration, some analysts had pointed out that not all was wrong with the 2018 review, and that it essentially was in line with the Obama administration’s nuclear modernization program. But the maximalist tone of the Trump administration’s approach toward nuclear weapons – and the accompanying hefty price tag – proved to be hard to sell.

On his part, President Joe Biden’s approach to nuclear modernization seems to be more prudent. As part of his answers to a 2019 questionnaire from the Council for a Livable World, then-candidate Biden had categorically dismissed the need for the United States to develop new tactical nuclear weapons and had generally adopted a much more restrained tone towards them compared to Trump.

As Biden wrote in response to a question, “The United States does not need new nuclear weapons. Our current arsenal of weapons, sustained by the Stockpile Stewardship program, is sufficient to meet our deterrence and alliance requirements.” When asked about the estimate price tag of $1.2 trillion to be spent over the next 30 years for modernization and upkeep of U.S. nuclear weapons, Biden noted that his administration “will work to maintain a strong, credible deterrent while reducing our reliance and excessive expenditure on nuclear weapons. My administration will pursue a sustainable nuclear budget that maintains a viable deterrent for us and our allies.” Consistently, reports indicate Biden may be contemplating cuts to Trump’s nuclear modernization plans.

Internal Department of Defense estimates from September 2020 show that modernizing the U.S. ICBM force alone would cost around $111 billion.

Since coming to office, the Biden administration has extended New START with Russia for another five years, and has signaled its willingness to engage with Iran around the Joint Comprehensive Plan of Action – an agreement that seeks to put robust curbs on Iran’s nuclear weapons ambitions, which the Trump administration exited in 2018. That said, modernization of the U.S. nuclear arsenal will almost certainly continue with Biden at the White House. Exactly what shape his approach towards the U.S. strategic arsenal takes, and what price tag is acceptable to him, remains to be seen.