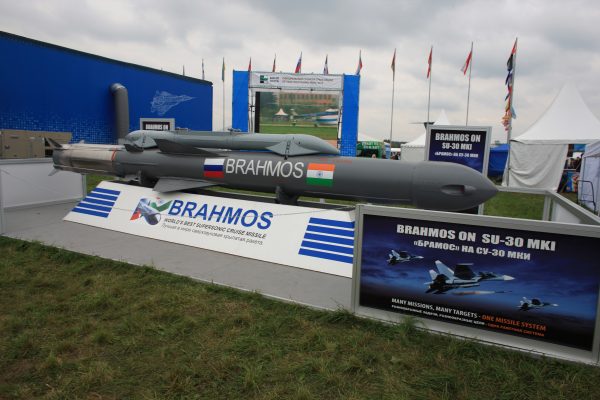 The Times of India reported on November 24 that the Indian military is likely to carry out a series of Brahmos supersonic cruise missiles tests this week. Tuesday morning (around 10 a.m. Indian Standard Time), the Indian Army carried out a test of the 290-kilometer range Brahmos missile from the Car Nicobar Islands against a target 200 kilometers away in the Bay of Bengal, according to an Indian Army statement. The statement adds (all sic): “The land attack version of BrahMos with capability of cruising at 2.8 Mach speed is the cutting edge of the Indian Army since 2007. The present Block III version of the missile has successfully executed four operational launches in the past. With the upgraded capability the missile can hit targets at a range of upto 400 Km [kilometers] with precision.”

Indian media reports also note that the Indian Navy and the Air Force will also carry out similar tests during the week, with a Defense Ministry source telling the Times of India, “The requisite advance warnings to aircraft and ships in the Arabian Sea and the Bay of Bengal has been issued.”

On October 18, a naval variant of the Brahmos missile was launched in a test from stealth destroyer INS Chennai, a Kolkata-class stealth guided missile destroyer, against a target in the Arabian Sea. All Kolkata-class ships are equipped with a 16-cell universal vertical launcher module capable of launching anti-ship Brahmos missiles; they have been tested from such ships on several occasions in the past few years.

On October 30, the Indian air force tested a Brahmos air-launched cruise missile (ALCM) from a Su-30 MKI jet, which took off from an airbase in Punjab in India’s west, and after travelling for over three hours, launched the missile that struck a target in the Bay of Bengal. The Indian air force tested the Brahmos ALCM for the first time last May, again from a Su-30 MKI aircraft. The strategic import of the October test was clear: to demonstrate Indian air superiority in the Indian Ocean relative to China. Analogously, a Su-30 MKI could take off from central or eastern India and hold large Chinese vessels over large swathes of eastern Indian Ocean at risk.

In January this year, Indian air force chief Air Marshall R K S Bhadauria had announced that those aircraft equipped with the Brahmos ALCM will be deployed on India’s northern borders “per threat analysis and plan” even though he noted “I would not say where.”

On September 1, Brahmos Aerospace, the India-Russia joint venture firm that builds the eponymous cruise missiles, tested a Brahmos with a range of 400 kilometers. While the Missile Control Technology Regime (MTCR) prohibits member states, which includes Russia, from transferring technologies for missiles with ranges greater than 300 kilometers, India’s MTCR membership since 2016 has ensured that India can acquire such missiles without running afoul of that regime, albeit uneasily. A source told The Print on November 24, India is also planning on developing a Brahmos missile with a 1,500-kilometer range, with an 800-kilometer range Brahmos in line to be tested next year. According to the outlet, India is also seeking to acquire hypersonic Brahmos missiles.

On September 30, the DRDO had tested a Brahmos land-attack cruise missile with an indigenous booster and air frame.

Along with cruise missile tests, over the past couple of months India has also tested a short-range nuclear capable ballistic missile on September 23 (Prithvi-II) and a medium-range nuclear-capable ballistic missile (Shaurya) on October 3; an anti-radiation missile (Rudram), which is designed to be used against enemy radar and air defense systems, on October 9; anti-tank missiles, including laser guided ones to be used from India’s ingeniously developed Arjun main battle tank, in September and October; as well as a technology demonstrator that could make way for a hypersonic missile capability for India on September 7. The Indian Defense Research and Development Organization (DRDO) also tested a Supersonic Missile Assisted Release of Torpedo (SMART) on October 5, a system through which a torpedo is mounted on a missile and launched from it once the enemy boat is in range.

Many have already wondered what lies behind this embarrassment of riches when it comes to recent Indian missile tests. According to one expert connected with the missile projects who was quoted in a Hindustan Times report, “The DRDO was quietly told to fast-track its missile programme in the early part of the [Ladakh] standoff because the Indian government had doubts about China’s commitment to peace on the border.” Others have speculated that tests in rapid successions, especially those from aircraft or ships, stand to signal to China that India can horizontally escalate any conflict with China across the Indian Ocean. And yet others have pointed to more quotidian reasons, arising out of a COVID-19 induced delay in scheduled tests, even though a DRDO scientist told the Indian Express, strategic signaling of this magnitude “can not happen without a deliberate push from the government even if the COVID factor is considered.”

So, if this is indeed “strategic signaling,” so far it has not made much difference on the ground. Recent news reports suggest that China has not only dug in in Ladakh but has also increased military activity across the entire Line of Actual Control, including in the central and eastern sectors. The simple fact of the matter is that signaling is hard. During the 2001-02 India-Pakistan “Twin Peaks” crisis, Pakistan carried out seven tests of nuclear-capable missiles. Yet, it remains unknown if this display of resolve on Pakistan’s part was perceived as credible in India or not, with a spokesperson for the Indian Ministry of External Affairs dryly remarking of Pakistan’s tests, “We are not impressed.”

It cuts both ways when it comes to India and China. During the ongoing Ladakh standoff, the People’s Liberation Army (PLA) too has tested multiple weapon systems, with the Chinese Communist Party tabloid Global Times (GT) ostentatiously promoting videos of PLA tests and preparedness on social media. Yet, there is very little evidence that India has sought to fold even as these threats – sometimes bordering on ludicrous, especially as GT presents them – have mounted.

In any event, China is likely to be aware of India’s extant missile capabilities, including those in the Brahmos family. Therefore, the question remains whether the recent barrage of Indian missile tests is for strategic signaling or a check of combat capabilities in preparation of a military contingency, however that might arise – or is to assuage a domestic audience in India.

Perhaps a bit of all of them.