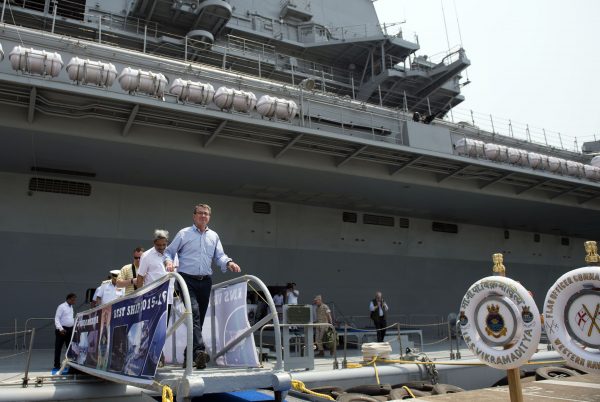 An Indian media report recently noted that the Indian Navy is looking to prioritize induction of nuclear-powered attack submarines over a new aircraft carrier following China’s push to induct a new class of destroyers. The report dovetails perfectly with the position expressed by India’s Chief of Defense Staff (CDS) General Bipin Rawat last year but raises questions on its own.

On March 24, the Hindustan Times reported that that “according to South Block officials, the Indian Navy told the country’s national security planners at the Combined Commanders Conference this month that the plan to build the nuclear-powered attack submarines or SSNs should take priority over the project to build a third aircraft carrier (also called indigenous aircraft carrier 2).”

India currently operates a solo aircraft carrier INS Vikramditya, a refurbished Soviet Kiev-class ship it acquired from Russia in 2014. India’s first indigenous carrier, INS Vikrant, is waiting to be inducted into the navy, possibly next year or the year after. Plans for a third carrier, to be also built at home, have been rocky for a while now, principally due to Indian defense budget constraints.

India operates a sole SSN, INS Chakra, that it leased from Russia in 2012. In March 2019 media reports claimed New Delhi had entered into an agreement with Moscow to lease another Akula-class boat, while seeking to extend the existing lease.

“It is understood that the Navy will seek ‘acceptance of necessity’ or AON approval from the government on the submarine project soon as China has developed the capacity to produce 12,000-tonne Renhai class [cruisers, which is the NATO designation for Type 055] destroyers in just five years,” the March 24 Hindustan Times report said.

On March 7, Chinese state-run tabloid Global Times, based on Chinese state television reports, said that a second Type 055 destroyer, Lhasa, had been “recently” inducted into service, with the first of its kind called into service in 2020. Reports suggest that the People’s Liberation Army Navy plans to have a fleet of eight Type 055 destroyers; all eight have been launched so far.

“It is in this context that the Navy is also seriously thinking of reviving its heavy-destroyer project to counter the 12,000-tonne cruisers being built by China,” the Hindustan Times report also said.

Interestingly, the newspaper also reported that India could partner with France to build the SSN fleet. “Apart from being India’s closest allies in defense technology, joint development of submarines with France is free from any regulatory regimes such as the International Traffic in Arms Regulation (ITAR) with the US or any future sanctions in case of Russia,” it said.

However, some Indian naval experts remain cautiously optimistic about the possibility. By way of a comment on the Hindustan Times article, analyst and former Indian Navy Commander Abhijit Singh tweeted that the plan to indigenously build SSNs has had official imprimatur since February 2015 when it was cleared by the Cabinet Committee on Security, and that the Indian Navy is likely to focus on its commitment to build a fleet of six Scorpene-class diesel-electric conventional attack boats by 2022.

In a Times of India interview May last year, Rawat – a former army chief – had bluntly noted his preference for submarines over aircraft carriers (even though, it must be kept in mind, capital acquisitions remain outside the CDS’ remit).

“Anything on the surface can be picked up by satellites and knocked off by missiles. I think the Navy needs more submarines than aircraft carriers, which themselves require their own individual armadas for protection,” he had said.