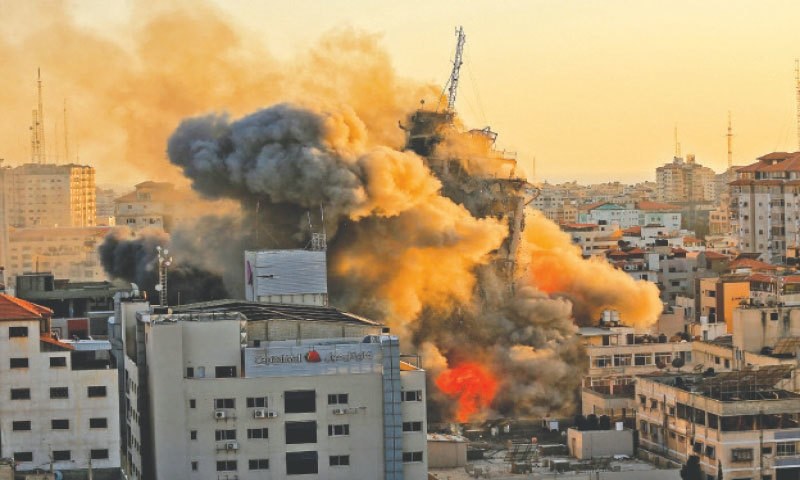 “This is just the beginning,” warned Prime Minister Benjamin Netanyahu.

“We’ll deliver them blows they haven’t dreamt of.” Gaza militants have launched more than 1,000 rockets since Monday, said Israel’s army, which has carried out hundreds of air strikes on Islamic groups in the crowded coastal enclave of Gaza.

The most intense hostilities in seven years have killed at least 56 people in Gaza, including 14 children, and six in Israel, including an Israeli soldier and one Indian national, since Monday.

Three Palestinians were killed in West Bank clashes. And at least 230 Palestinians and 100 Israelis have been wounded.

The bloodshed was triggered by weekend violence at Jerusalem’s Al-Aqsa mosque compound, which is sacred to both Muslims and Jews.

The UN Security Council held another emergency meeting without agreeing on a joint statement due to opposition from the United States, Israel’s main ally.

Netanyahu declared a state of emergency in the mixed Jewish-Arab Israeli city of Lod, where police said “wide-scale riots erupted among some of the Arab residents”, and authorities later imposed an overnight curfew there.

There were fears of widening civil unrest as protesters waving Palestinian flags burnt cars and properties, including a synagogue, clashed with Israeli police and attacked Jewish motorists in several Jewish-Arab towns.

Israel’s President Reuven Rivlin, in unusually strong language, denounced what he described as a “pogrom” in which “an incited and bloodthirsty Arab mob” had injured people and attacked sacred Jewish spaces.

Rivlin said Israelis needed “to be ready and armed, strong and determined, prepared to defend our home”.

Of these, 850 have hit in Israel or been intercepted by Israel’s Iron Dome air defence system, while the rest have crashed inside Gaza, the army said.

Israel has launched hundreds of air strikes on Gaza, the Israeli-blockaded strip of two million people that Hamas controls, targeting what the army described as “terror” sites.

Hamas said several of its top commanders were killed in Israeli strikes, including its military chief in Gaza City, Bassem Issa.