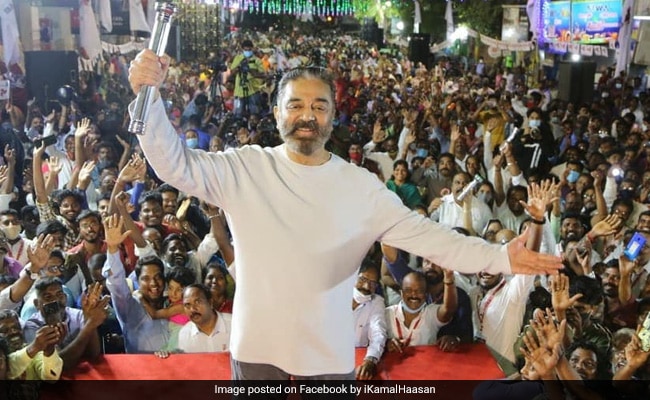 Veteran movie actor and Makkal Needhi Maiam (MNM) founder Kamal Haasan was today trailing as vote counting entered the final rounds in Tamil Nadu‘s Coimbatore (South) constituency. This was a change from the early trends that showed him leading.

The BJP’s Vanathi Srinivasan overtook him by a little more than 1,000 votes by around 6 pm. The Congress’s Mayura Jayakumar wasn’t too far behind, though it may be too late for her to catch up at this stage.

Earlier, he reached the counting Centre at the city’s GCT College campus.

The Assembly polls in Tamil Nadu were held on April 6. The counting of votes began at 8 am today, with the DMK scoring a considerable lead early in the day. By the final rounds, it was leading in 143 seats, leaving behind the ruling AIADMK with 90. The party needs only 118 seats to cross the half-way mark in the 234-member Tamil Nadu Assembly.

This election was the first for the state to be held in the absence of two towering leaders, former Chief Ministers J Jayalalithaa and M Karunanidhi.

The DMK has been out of power since 2011. The MNM was founded only February 2018 by the thespian, vowing to veer the state away from the ways of the two key mainstream outfits.

Exit polls have predicted a sweep for the DMK-led alliance. The AIADMK-led alliance includes the BJP while the DMK is allied with the Congress and the Left parties.