India is now the global hotspot for the pandemic, with infections climbing above 18 million cases

The unfolding Covid crisis in India is raising expectations that Prime Minister Narendra Modi’s government will need to raise more funds for stimulus even as the outbreak worsens its finances. States and cities through the country, including the capital New Delhi and financial hub Mumbai, have implemented lockdowns or curfews, which are seen impacting public revenue. That comes as the authorities are lagging their existing financing target by Rs 188 billion ($2.5 billion) just one month into the new fiscal year, according to Bloomberg’s calculations based on official data. 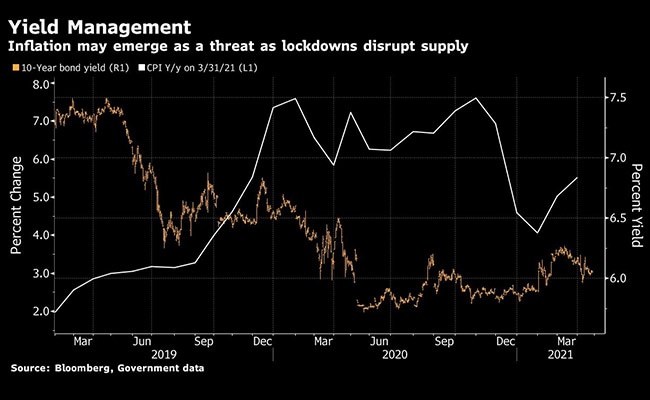 PM Modi’s administration has fallen behind on its financing plans after auctions in April failed to raise as much as it targeted. Sensing the government’s growing need for funds, traders are holding out for higher yields, with the central bank forced to cancel sales or boost purchases if it refuses to accede.

“The fear is that localized lockdowns may result in a slowdown which may be met by fiscal expansion, and more borrowing pushing longer yields higher,” said Vikas Goel, chief executive and managing director at PNB Gilts. India’s curve is likely to steepen with the 10-year yield climbing to 6.35 per cent in the next two to three months from around 6.06 per cent now, he added.

The face-off marks the latest battle for control of India’s bond market, after the central bank earlier rejected traders’ demands for higher yields at a sale of benchmark debt. Underwriters were forced to rescue a five-year bond sale on April 9 and the central bank missed its target for an offering last week.

A debt auction on Friday may provide a clue as to how the tussle will play out. The RBI is scheduled to offer bonds worth Rs 260 billion, including Rs 140 billion of benchmark 10-year notes.

Much of the market’s worries center around the government’s plan to borrow a near-record Rs 12.1 trillion this year. For now, there are no signs the government intends to increase that amount although Finance Minister Nirmala Sitharaman said last week she won’t hesitate to front load borrowings if the need arises.

India is now the global hotspot for the pandemic, with infections climbing above 18 million cases, while deaths have exceeded 200,000. The government has come under increasing pressure as hospitals run out of beds, oxygen and medical supplies in many parts of the country.

Traders are also trying to assess whether the new lockdowns and curbs will disrupt the flow of goods and drive up prices. While the central bank has pledged to keep policy accommodative, it has warned that a failure to contain the second wave may disrupt domestic supply chains and fuel inflationary pressures.

“The issue is how does the huge borrowing program go through,” said V. Lakshmanan, treasurer at Federal Bank. “Investor interest has added up significantly in the short term, while the stated intent on new issuances is to go longer term from the government perspective. Further, there is too much focus on the benchmark paper.”