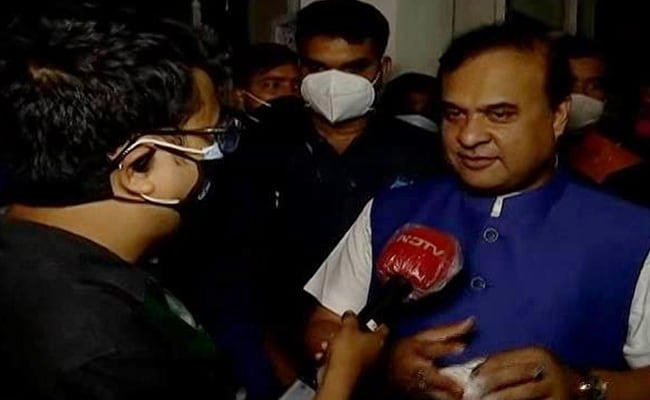 The identity of Assam’s new Chief Minister – the next major talking point now that the BJP has retained power in the state – will be decided in a day or two, senior leader Himanta Biswa Sarma told NDTV Sunday night.

Mr Sarma, tipped by some to replace incumbent Sarbananda Sonowal, played down any such talk, and said the decision would be the result of a “fair, internal election”.

“Home Minister Amit Shahji has already clarified that the chief ministerial candidate will be picked by the BJP’s parliamentary panel in a fair, internal election… that will be decided in a day or two, when they all arrive in Assam,” Mr Sarma said.

The BJP is en route to a big win in the northeastern state; leads+results at 9 pm show it is winning 78 seats (down eight from 2016) to the Congress-led opposition alliance’s 46.

Mr Sarma has retained his stronghold of Jalukbari, winning by over 60,000 votes.

For this election the BJP tied up with the Asom Gana Parishad and the UPPL (United People’s Party Liberal, and ran a high-voltage campaign that included appearances from Prime Minister Narendra Modi, Amit Shah and UP Chief Minister Yogi Adityanath.

The opposition alliance led by the Congress included Badruddin Ajmal’s All India United Democratic Front, and Mr Sarma said the BJP was confident of victory when their two rivals joined hands.

“We were quite confident of taking on any opposition… but when we saw Badruddin Ajmal join the Congress-led alliance we became sure this will now not work for them,” he said.

“We knew his joining the Congress alliance will only polarise the votes and the people of Assam were only looking for development and would reject appeasement and polarisation,” he added.

Mr Sarma was also asked about the BJP’s underwhelming (given the amount of time, money and prestige invested) result in Bengal, where the ruling Trinamool is set to record a massive win.

“You must focus on the achievements of the BJP workers… we have been able to establish the BJP in Bengal… have taken our number in the Assembly from three to around 80… and have become the main opposition party in the state,” he said.

Mr Sarma also pointed out the sitting Chief Minister, Mamata Banerjee, had lost; she was beaten in a high-stakes contest from Nandigram by the BJP’s Suvendu Adhikari, her one-time protege.

“So today’s debate should be about where Mamata Banerjee went wrong … (for a) sitting Chief Minister to lose their seat is a very big issue,” he said.

Apart from the highlight of retaining Assam (and the glee with which Ms Banerjee’s defeat was received), the BJP has not had a particularly successful time in this round of state elections.

The party was beaten comprehensively in Tamil Nadu and shut out in Kerala.

It is, however, set to win Puducherry, albeit as the NR Congress’s junior partner.