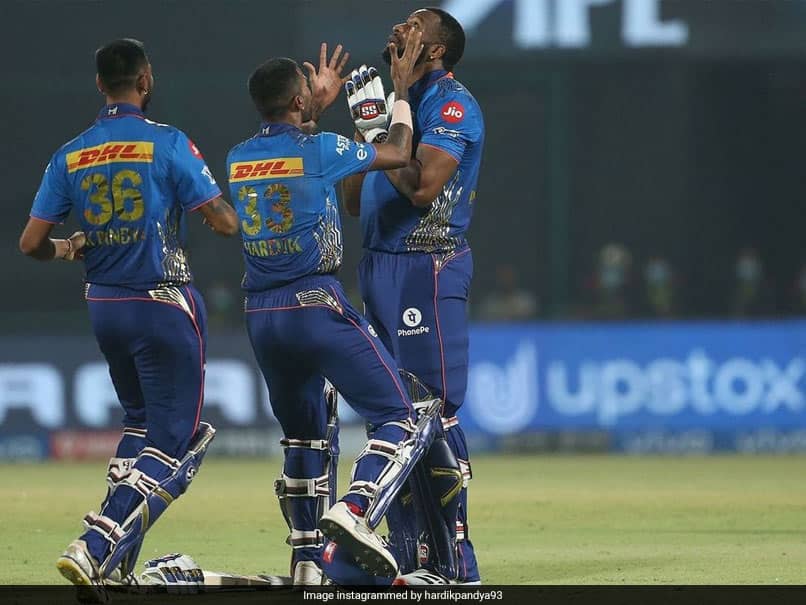 Hardik and Krunal were in awe of Kieron Pollard after the all-rounder’s unbeaten 87 off 34 balls.© Instagram

Kieron Pollard was at his belligerent best against Chennai Super Kings (CSK) on Saturday as he helped Mumbai Indians chase down their highest-ever total in Indian Premier League (IPL) — 219 runs. The West Indies all-rounder, after taking two wickets for just 12 runs, played an unbeaten knock of 87 off 34 to help Mumbai Indians chase down 219-run target in a high-scoring last-ball thriller in Delhi. After the win, Hardik and Krunal Pandya bowed down to Pollard and called him the G.O.A.T (Greatest Of All Time). In a video posted on IPL’s official Twitter handle, Hardik and Krunal lavished praise on Pollard.

“Pollard is the G.O.A.T. Pandya brothers are mind-blown by the @KieronPollard55 show in Delhi. Do Not Miss: @hardikpandya7 & @krunalpandya24’s interesting take on Big Polly’s bowling cameo #VIVOIPL #MIvCSK @mipaltan,” the video was captioned.

Pandya brothers are mind-blown by the @KieronPollard55 show in Delhi.

“People don’t talk about him that much but according to us he is G.O.A.T, one of the greatest of all time. If you see the chase which we did, there are only few people who have done it and if you Pollard has done a chase like this so many times,” Krunal said.

“We have to tell one thing that Kieron Pollard hits sixes for breakfast but if he takes a wicket or he bowls well, for him you know when you give candy to a kid, he is like that,” Hardik added.

In the match, Pollard had bowled two overs and picked up two wickets while giving away just 12 runs in a match that saw over 400 runs being scored during the course of 40 overs.

Chasing a mammoth total, Pollard kept the defending champions in the hunt as he smashed eight maximums and six boundaries and eventually won the game for Mumbai Indians on the last ball of the match.