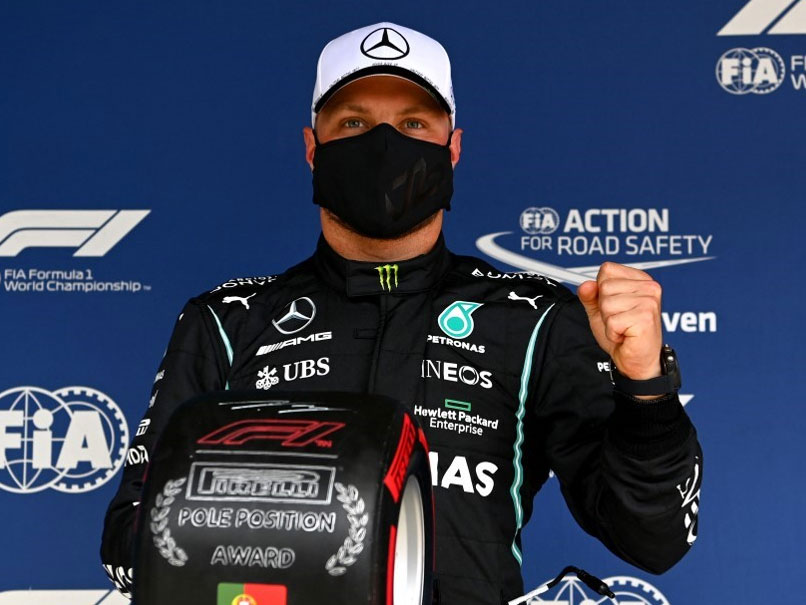 Valtteri Bottas took pole position for the Portuguese Grand Prix with seven-time world champion Lewis Hamilton completing a Mercedes front-row lockout in qualifying on Saturday. Hamilton’s pursuit of a 100th pole at the track where last year he notched up his record 92nd win was delayed when Bottas earned the 17th of his career.

“It’s a good feeling to be on pole,” said Bottas after a final qualifying session lap of 1min 18.348sec.

He added: “Feels like it’s been a while. It’s been a weak point for me in the first two races. The team have been working hard all weekend and we have a good position for tomorrow.”

Bottas’ performance was well-timed after he had qualified third in the season-opener in Bahrain but then a lowly eighth at Emilia-Romagna.

His time was just 0.007sec faster than Hamilton.

Red Bull‘s Max Verstappen, one point off Hamilton in the drivers’ standings, took third on Sunday’s grid with his teammate Sergio Perez alongside him on the second row in Portimao.

Verstappen had in fact bettered Bottas’ time but had his 1min 18.209sec run scrubbed out after exceeding track limits.

Ferrari’s Carlos Sainz came in fifth ahead of the Alpine of Esteban Ocon, Lando Norris, in a McLaren, and Charles Leclerc in the second Ferrari.

Hamilton paid tribute to Bottas “and our team for us both to be on the front row”.

“It was not expected. We have to be happy for that, it was not the perfect lap but I gave it everything.

“You can never be satisfied, we exist to keep moving forward but I’m happy with what we’re doing and the steps we’re taking.”

Hamilton narrowly leads the 2021 championship after he won the opener in Bahrain before Dutch rival Verstappen hit back at Imola.

“Third is of course not what we wanted but it’s not too bad after I had a Q3 lap time deleted, which would actually have put us fastest,” said Verstappen.

“We struggled with the balance in Q1 and Q2 because of the track surface, and everyone is chasing grip, but we got to a decent level in Q3 so I don’t think we are too far off.”

Bottas’ last outing at Imola was one to forget as he and Williams driver George Russell collided at 300km/h.

Both cars were wrecked that day and Russell was furious with the Finn before the pair continued their clash off the track with a bitter war of words.

Russell will start on the sixth row on Sunday with Pierre Gasly, in an AlphaTauri, and four-time world champion Sebastian Vettel, n an Aston Martin, ahead of him.

“We all have our responsibilities, and as a team we did a really good job.”

“Tomorrow we’ve got to keep moving forward. We have a good race car – it’s fast on the straights, so let’s see what we can do.”

The Haas pair of Mick Schumacher and Nikita Mazepin start at the back.