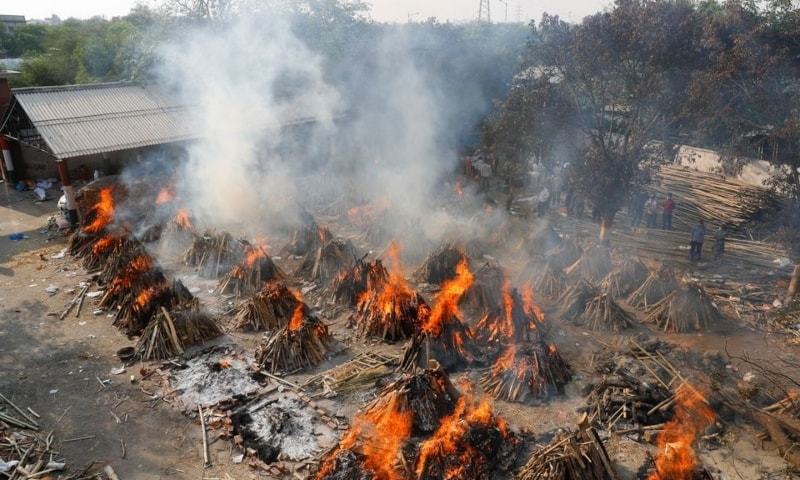 A forum of scientific advisers set up by the government had warned Indian officials in early March of a new and more contagious variant of the coronavirus taking hold in the country, five scientists who are part of the forum told Reuters.

Despite the warning, four of the scientists said the federal government did not seek to impose major restrictions to stop the spread of the virus. Millions of largely unmasked people attended religious festivals and political rallies that were held by Prime Minister Narendra Modi, leaders of the ruling Bharatiya Janata Party and opposition politicians.

Tens of thousands of farmers, meanwhile, continued to camp on the edge of New Delhi protesting Modi’s agricultural policy changes.

The world’s second-most populous country is now struggling to contain a second wave of infections much more severe than its first one last year, which some scientists say is being accelerated by the new variant and another variant first detected in Britain. India reported 386,452 new cases on Friday, a global record.

The spike in infections is India’s biggest crisis since Modi took office in 2014. It remains to be seen how his handling of it might affect Modi or his party politically. The next general election is due in 2024. Voting in the most recent local elections was largely completed before the scale of the new surge in infections became apparent.

The warning about the new variant in early March was issued by the Indian SARS-CoV-2 Genetics Consortium, or INSACOG. It was conveyed to a top official who reports directly to the prime minister, according to one of the scientists, the director of a research centre in northern India, who spoke on condition of anonymity. Reuters could not determine whether the INSACOG findings were passed on to Modi himself.

Modi’s office did not respond to a request for comment from Reuters.

INSACOG was set up as a forum of scientific advisers by the government in late December specifically to detect genomic variants of the coronavirus that might threaten public health. INSACOG brings together 10 national laboratories capable of studying virus variants.

INSACOG researchers first detected B.1.617, which is now known as the Indian variant of the virus, as early as February, Ajay Parida, director of the state-run Institute of Life Sciences and a member of INSACOG, told Reuters.

INSACOG shared its findings with the health ministry’s National Centre for Disease Control (NCDC) before March 10, warning that infections could quickly increase in parts of the country, the director of the northern India research centre told Reuters. The findings were then passed on to the Indian health ministry, this person said. The health ministry did not respond to requests for comment.

Around that date, INSACOG began to prepare a draft media statement for the health ministry. A version of that draft, seen by Reuters, set out the forum’s findings: the new Indian variant had two significant mutations to the portion of the virus that attaches to human cells, and it had been traced in 15 per cent to 20pc of samples from Maharashtra, India’s worst-affected state.

The draft statement said that the mutations, called E484Q and L452R, were of “high concern.” It said “there is data of E484Q mutant viruses escaping highly neutralising antibodies in cultures, and there is data that L452R mutation was responsible for both increased transmissibility and immune escape.”

In other words, essentially, this meant that mutated versions of the virus could more easily enter a human cell and counter a person’s immune response to it.

The ministry made the findings public about two weeks later, on March 24, when it issued a statement to the media that did not include the words “high concern.” The statement said only that more problematic variants required following measures already underway — increased testing and quarantine. Testing has since nearly doubled to 1.9 million tests a day.

Asked why the government did not respond more forcefully to the findings, for example by restricting large gatherings, Shahid Jameel, chair of the scientific advisory group of INSACOG, said he was concerned that authorities were not paying enough attention to the evidence as they set policy.

“Policy has to be based on evidence and not the other way around,” he told Reuters. “I am worried that science was not taken into account to drive policy. But I know where my jurisdiction stops. As scientists we provide the evidence, policymaking is the job of the government.”

The northern India research centre director told Reuters the draft media release was sent to the most senior bureaucrat in the country, Cabinet Secretary Rajiv Gauba, who reports directly to the prime minister. Reuters was unable to learn whether Modi or his office were informed of the findings. Gauba did not respond to a request for comment.

The government took no steps to prevent gatherings that might hasten the spread of the new variant, as new infections quadrupled by April 1 from a month earlier.

Modi, some of his top lieutenants, and dozens of other politicians, including opposition figures, held rallies across the country for local elections throughout March and into April.

The government also allowed the weeks-long Kumbh Mela religious festival, attended by millions of Hindus, to proceed from mid-March. Meanwhile, tens of thousands of farmers were allowed to remain camped on the outskirts of the capital New Delhi to protest against new agriculture laws.

To be sure, some scientists say the surge was much larger than expected and the setback cannot be pinned on political leadership alone. “There is no point blaming the government,” Saumitra Das, director of the National Institute of Biomedical Genomics, which is part of INSACOG, told Reuters.

INSACOG reports to the NCDC in New Delhi. NCDC director Sujeet Kumar Singh recently told a private online gathering that strict lockdown measures had been needed in early April, according to a recording of the meeting reviewed by Reuters.

“The exact time, as per our thinking, was 15 days before,” Singh said in the April 19 meeting, referring to the need for stricter lockdown measures.

Singh did not say during the meeting whether he warned the government directly of the need for action at that time. Singh declined to comment to Reuters.

Singh told the April 19 gathering that more recently, he had relayed the urgency of the matter to government officials.

“It was highlighted very, very clearly that unless drastic measures are taken now, it will be too late to prevent the mortality which we are going to see,” said Singh, referring to a meeting which took place on April 18. He did not identify which government officials were in the meeting or describe their seniority.

Singh said some government officials in the meeting worried that mid-sized towns could see law and order problems as essential medical supplies like oxygen ran out, a scenario that has already begun to play out in parts of India.

The need for urgent action was also expressed the week before by the National Task Force for Covid-19, a group of 21 experts and government officials set up last April to provide scientific and technical guidance to the health ministry on the pandemic. It is chaired by VK Paul, Modi’s top coronavirus adviser.

The group had a discussion on April 15 and “unanimously agreed that the situation is serious and that we should not hesitate in imposing lockdowns,” said one scientist who took part.

Paul was present at the discussion, according to the scientist. Reuters could not determine if Paul relayed the group’s conclusion to Modi. Paul did not respond to a request for comment from Reuters.

Two days after Singh’s April 18 warning to government officials, Modi addressed the nation on April 20, arguing against lockdowns. He said a lockdown should be the last resort in fighting the virus. India’s two-month-long national lockdown a year ago put millions out of work and devastated the economy.

“We have to save the country from lockdowns. I would also request the states to use lockdowns as the last option,” Modi said. “We have to try our best to avoid lockdowns and focus on micro-containment zones,” he said, referring to small, localised lockdowns imposed by authorities to control outbreaks.

India’s state governments have wide latitude in setting health policy for their regions, and some have acted independently to try to control the spread of the virus.

Maharashtra, the country’s second-most populous state, which includes Mumbai, imposed tough restrictions such as office and store closures early in April as hospitals ran out of beds, oxygen and medicines. It imposed a full lockdown on April 14.

The Indian variant has now reached at least 17 countries including Britain, Switzerland and Iran, leading several governments to close their borders to people travelling from India.

The World Health Organisation (WHO) has not declared the India mutant a “variant of concern,” as it has done for variants first detected in Britain, Brazil, and South Africa. But the WHO said on April 27 that its early modelling, based on genome sequencing, suggested that B.1.617 had a higher growth rate than other variants circulating in India.

The UK variant, called B.1.1.7, was also detected in India by January, including in the northern state of Punjab, a major epicentre for the farmers’ protests, Anurag Agrawal, a senior INSACOG scientist, told Reuters.

The NCDC and some INSACOG laboratories determined that a massive spike in cases in Punjab was caused by the UK variant, according to a statement issued by Punjab’s state government on March 23.

Punjab imposed a lockdown from March 23. But thousands of farmers from the state remained at protest camps on the outskirts of Delhi, many moving back and forth between the two places before the restrictions began.

“It was a ticking time bomb,” said Agrawal, who is director of the Institute of Genomics and Integrative Biology, which has studied some samples from Punjab. “It was a matter of an explosion, and public gatherings is a huge problem in a time of pandemic. And B.1.1.7 is a really bad variant in terms of spreading potential.”

By April 7, more than two weeks after Punjab’s announcement on the UK variant, cases of coronavirus began rising sharply in Delhi. Within days, hospital beds, critical care facilities, and medical oxygen began running out in the city. At some hospitals, patients died gasping for air before they could be treated. The city’s crematoriums overflowed with dead bodies.

Delhi is now suffering one of the worst infection rates in the country, with more than three out of every 10 tests positive for the virus.

India overall has reported more than 300,000 infections a day for the past nine days, the worst streak anywhere in the world since the pandemic began. Deaths have surged, too, with the total exceeding 200,000 this week.

Agrawal and two other senior government scientists told Reuters that federal health authorities and local Delhi officials should have been better prepared after seeing what the variants had done in Maharashtra and Punjab. Reuters could not determine what specific warnings were issued to whom about preparing for a huge surge.

“We are in a very grave situation,” said Shanta Dutta, a medical research scientist at the state-run National Institute of Cholera and Enteric Diseases. “People listen to politicians more than scientists.”

Rakesh Mishra, director of the Centre for Cellular and Molecular Biology, which is part of INSACOG, said the country’s scientific community was dejected.