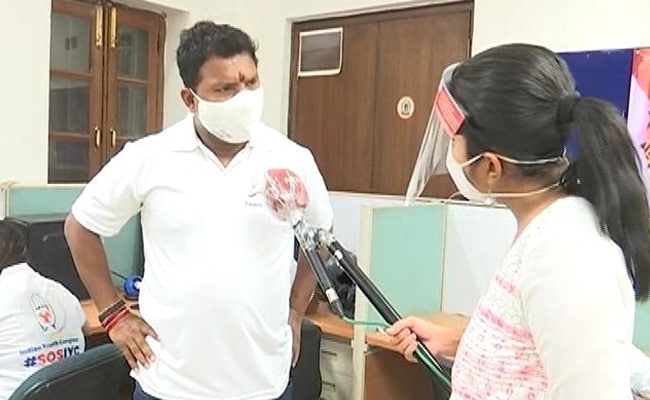 The second wave of Covid ripping through the country, Srinivas BV is the man every second person on Twitter is tagging right now for help. Around 2.45 pm on Thursday, when NDTV reached his office, he was sorting through thousands of tweets in a war room inside the Indian Youth Congress Office in Delhi. He is supported by a team of 15 young men who are working on computers, all in white shirts and jeans. The t-shirt has the Indian Youth Congress logo and a picture of Rahul Gandhi. Twitter is open on each screen and notifications are popping up every minute.

One request stands out — a plea from a father for his 3-year-old, who is gasping for breath in North Delhi’s Narela.

Immediately, Mr Srinivas and his team load an oxygen concentrator in their car and leave for Narela — a race against time. The family has already been informed that help is on way.

It takes an hour to cover the 40-km distance and hand over the concentrator to the family. The child is lying on the bed, his oxygen cylinder running low. An oximeter shows his oxygen level is 83 — way below the safety level.

The team patiently explains to the family how the concentrator should be operated.

The child’s father, 43-year-old Alok Kumar, an Assistant Professor at Delhi University’s Shri Ram College of Commerce, is Covid positive and grateful for the help. His son is already suffering multiple immunity disorders.

“The kind of selfless service that they are doing for humanity… there is no parallel for it in Delhi,” Alok Kumar told NDTV. “I called multiple places but nobody even picked up the phone. Nobody helped me like they did.”

Not just saving lives, Mr Srinivas and his team take care of other, smaller needs too. Hundreds of home isolation kits are given out to patients, which carry basic medication like vitamin tablets and cough syrup.

The 39-year-old was at one point a talented wicketkeeper batsman and represented Karnataka in under-19 cricket. His career in sports stopped when he hurt his eye during a match in 2003.

Three years later, he became a member of the Youth Congress. In 2010, he shifted base from Bengaluru to Delhi.

Since the pandemic struck in 2020, he set up a network of Youth Congress volunteers under “SOS IYC”. Rahul Gandhi liked his work and appointed him as the President of Indian Youth Congress.

As part of the IYC initiative, Mr Srinivas has supervised the setting up of Covid control rooms in all states but the main one is in Delhi.

“It is heart-wrenching to see that there are so many families where every single member is down with Covid and they desperately seek help,” Mr Srinivas said.  “There are no resources at all. We try to do our best. So many of our people are risking their own health to work on this. A thousand of our IYC members are working across India. These boys in this war room work for 16-17 hours each day. I get to sleep for 4-5 hours but there are so many requests. We try to address each issue at the earliest.”

It is not just common people who are reaching out to him. Even embassies did so which apparently did not go down well with the government.

#SOSIYC members at Embassy of the Philippines in New Delhi. @indembmanilapic.twitter.com/IkvcKAtdR3

Also, they thanked the #SOSIYC team for this quick relief as patient inside embassy was critically ill. pic.twitter.com/vu6TUhD1r8

MEA checked with the Philippines Embassy. This was an unsolicited supply as they had no Covid cases. Clearly for cheap publicity by you know who. Giving away cylinders like this when there are people in desperate need of oxygen is simply appalling. @Jairam_Rameshhttps://t.co/G3jPE3c0nR

Mr Srinivas says these things do not stop him. “We are seeing people dying on the streets every day and we are unable to bear that pain. We don’t pay attention to who is saying what. It is the culture and tradition of India to take care of each individual who comes here,” he said.

While he and his team toil day and night to save lives, he says the general public can also help a lot with small contributions.

“People have so much fear and stigma of the disease that nobody comes forward to help. Entire families are dying because of Covid and we help even with cremations. But people should offer what little help they can. Even if you can’t give an oxygen cylinder or concentrator to your neighbour, at least check how they are managing to eat. Go and place a tiffin outside their house. They might be struggling to manage even that one meal,” he said.