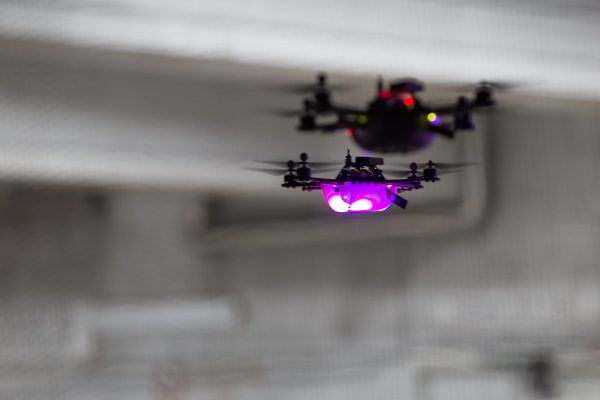 Swarming has been the future of war for decades, but it has not always been the same future. In the early 2000s, military futurists in the United States were thinking about swarming tactics with reference to a potential Iranian strategy of overwhelming qualitatively superior but expensive and rare U.S. Navy vessels in the crowded waters of the Persian Gulf; the use of overwhelming numbers of anti-ship cruise missiles and suicide speedboats was a key element in the controversial and endlessly-studied Millennium Challenge wargame in 2002.

Since then, the rapid growth in capability of computer and sensor systems has changed what a “swarm” could be. Now, swarming mostly refers to the potential for a massed force of relatively simple, cheap robots which could overwhelm traditional defenses by sheer numbers and strike numerous targets precisely and rapidly.

There are, of course, complications. Building robots smart enough to navigate and avoid colliding with each other autonomously, share data with each other, and respond to changing circumstances while resisting jamming and carrying out a mission is hard enough – let alone the challenges of making those machines cheap and durable enough to compare favorably with conventional weapons systems. In other words, the fact that drone swarms have not yet been deployed operationally is not hugely surprising, though developments in China and the U.S. suggest that those obstacles are being rapidly overcome

Once they are, though, the nature of such a swarm might well fundamentally challenge the relationship between individuals, states, and weapons.

After all, the use of weapons in combat is only one of their functions – perhaps the most important, but in many cases, the rarest. The U.S. Navy’s only serving warship that has sunk an enemy vessel is the 200-year-old frigate USS Constitution; the U.S. Air Force has shot down so few enemy planes that its last ace flew during the Vietnam War. The vast and rapidly modernizing Chinese People’s Liberation Army hasn’t fought a war since 1979; virtually none of its front-line combat equipment has ever seen a battlefield.

But an arsenal in peacetime does more than gather dust. And while there are obvious differences between, say, an infantry soldier’s rifle and a multi-billion-dollar warship, there are clear analogies: a rifle can communicate its wielder’s intent by being visibly loaded and carried at the ready; a warship can communicate its nation’s intent by simply sailing to a disputed boundary or carrying out a joint exercise. And both can symbolize prestige and martial spirit, whether emblazoned on a national flag or paraded in front of political leaders and news cameras.

Obviously, we are nowhere close to robotic weapons – of any kind – completely replacing human soldiers and crewed systems. But even the type of drone swarms that can be imagined using near-future technology will represent a leapfrog capability, just as somewhat larger drones have put precision tactical airpower on the table for smaller, poorer militaries. And the fact that swarms offer potentially transformational capabilities to rich and poor nations alike demonstrates the enormously steep climb faced by the movement to ban them before they proliferate.

A massed formation of cheap robots is also a mortal threat to the existing ways in which we use overt displays of arms to message and to deter. Will a thousand armed quadrotors buzzing in unison over a military parade be understood as a game-changing military capability, or will it need to be demonstrated in action with the attendant human cost before strategic assumptions begin to slowly, grindingly change to keep up? And with insurgencies already successfully using commercial drones for reconnaissance, propaganda and strike missions, is there any hope of preventing armed swarms from proliferating outwards into the world of non-state armed groups?

There is unlikely to be much heroism in controlling a swarm; and likely little tactical brilliance necessary in giving it a broad set of parameters and the permission to act. National myths the world over are built on the idea of courageous, selfless soldiers and canny, steely-eyed leaders; those myths are echoed at the individual level in many societies by the idea of skilled, armed self-defense. Will those myths stretch to include coders who refined targeting algorithms and officers who simply gave the order to deploy a swarm? And for nations targeted by such weapons, is there space to recognize the bravery and sacrifice of soldiers who were picked off by a flock of tiny, expendable robots? Or will their deaths simply be yet another gruesome slaughter at the dawn of yet another new technological age – an autonomous Verdun?

Over time our moral, legal, and strategic frameworks will catch up and adjust, as they have to previous developments in military technology. But the question of how much damage is done before we can compensate is very much open.