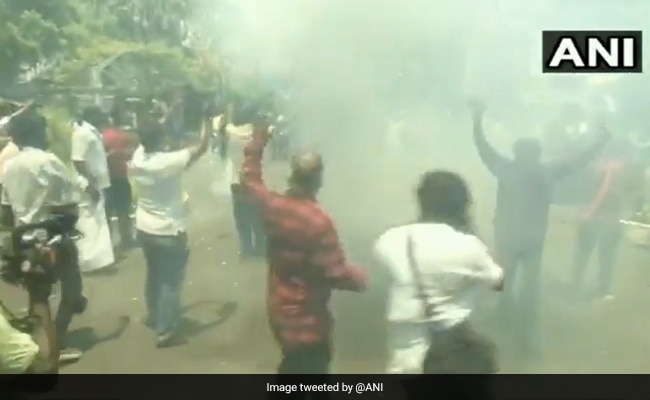 The DMK has asked its cadres to celebrate the party’s victory at home.

A Tamil Nadu Police Inspector was today suspended from service for his failure to stop the victory celebrations by party workers and supporters at the Dravida Munnetra Kazhakam (DMK) headquarters in Chennai. The celebrations were in violation of the Election Commission’s orders banning such festivities amid a devastating second COVID-19 wave sweeping the country.

The suspension of the Teynampet Police Inspector, Murali, followed the poll panel’s letter to the Tamil Nadu Chief Secretary.

#WATCH | DMK supporters continue to celebrate outside party headquarters in Chennai as official trends show the party leading on 118 seats so far.

Election Commission of India has banned any victory procession amid the #COVID19 situation in the country.#TamilNaduElections2021pic.twitter.com/z6Fp5YRnKP

With the counting of votes underway in four states and a Union Territory, the Election Commission today said it had taken a stern view of reports of the congregation of people to celebrate anticipated victories.

“The ECI has directed chief secretaries of all five states to file FIR in each such case, suspend the SHO of the concerned police station and report action taken immediately of each such incidence,” an Election Commission spokesperson said.

It had recently also banned victory processions on counting day to curb the spread of coronavirus.

The counting of votes, which began at 8 am, for the assembly polls in Assam, Kerala, Tamil Nadu, West Bengal, and the Union Territory of Puducherry is underway at a time the country is grappling with a raging Covid-19 pandemic. Tamil Nadu yesterday recorded 19,588 fresh COVID-19 cases and 147 deaths.

By afternoon, the DMK-led alliance was on course to a comfortable victory in the state.

“The cadres are simply jubilant. Our leader’s advice to the cadres is that let them celebrate from their homes as Election Commission is taking serious note of any violation. We are a responsible political party,” TKS Elangovan of the DMK said in Chennai.