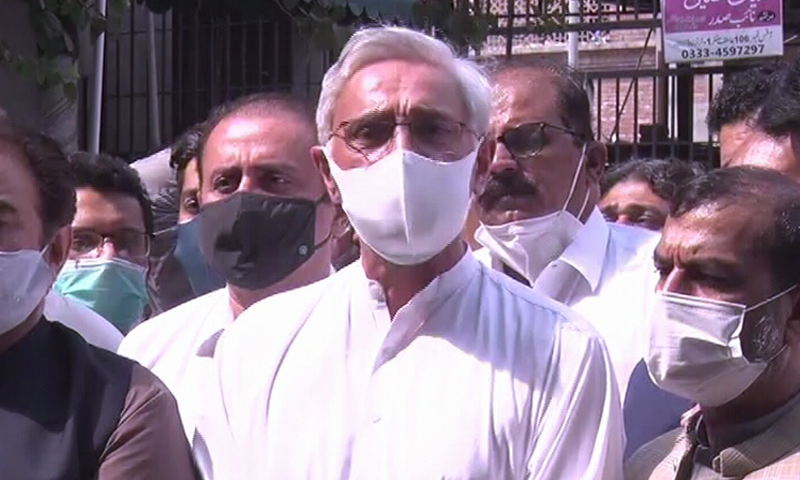 Estranged PTI leader Jahangir Tareen said on Monday that the group of PTI lawmakers backing him had had a good meeting with Prime Minister Imran Khan where they expressed their reservations and were assured of justice.

“We don’t run from investigation, I’ve never run away from this investigation,” said Tareen, adding that the probe had been proceeding since a year and he had provided hundreds of thousands of documents to the court.

He also said that officers and officials of his company had appeared 75 to 100 times in court and “hopefully a solution will be found to this but remember we never said to finish cases.”

“We want that an investigation is fully done so when we succeed then the nation can see that we have succeeded rightly,” said the sugar baron. He said Senator Barrister Ali Zafar — tasked by the prime minister with overseeing the sugar scam probe — had started doing his work and praised him as a “very good, wise and experienced lawyer” who knew corporate affairs.

He said his case was not a criminal case and the Federal Investigation Agency had no role in it since it was based on business issues and there was no element of use of public funds, secret accounts or money laundering.

“So we hope from Ali Zafar that he will present a report to Khan sahab after taking a good look.”

Tareen said he had appeared in court whenever there was a hearing and wanted the court to work and “act in a transparent manner”. He did not respond to a reporter when asked to comment on comments made by Foreign Minister Shah Mahmood Qureshi but said, “It doesn’t suit us to talk about such things.”

Interim bail extended till May 19

Both Tareen and his son, Ali Tareen, were present in court on Monday where Additional Sessions Judge Hamid Hussain presided over the hearing of their bail petition.

Along with extending their interim bail to May 19, the court ordered the FIA to complete its investigation as soon as possible and submit an inquiry report.

During the hearing, the FIA deputy director said that the statements of the co-accused in the case had yet to be recorded and there were still records yet to be received from the bank. “As soon as the record is complete we will complete the investigation.”

The judge said that all of the responsibility was on the FIA’s investigation officer and questioned: “The court had called for an inquiry report in the case. Where is the file?”

The judge expressed his displeasure over the FIA’s failure to submit the inquiry report.

“The FIA ​​should present the inquiry report at the next hearing. If the report is not submitted at the next hearing, action will be taken against the FIA,” the judge said, adding that the FIA should complete the investigation as soon as possible.

Tareen’s lawyer, Barrister Salman Safdar, while giving his arguments said that the FIA had “accepted its mistake”. He said that Bakhsh had been added to the investigation and Tareen would state his requests before him.

“The FIA ​​case is of a strange nature,” he said, adding that there were “many flaws”. He contended that the case had no substance and should be disposed of.

The FIA had booked estranged PTI leader Jahangir Tareen and his son, Ali Tareen, for fraud and money laundering in March.

According to FIRs dated March 22, copies of which are available with Dawn.com, two separate cases were registered under sections 406 (criminal breach of trust), 420 (cheating of public shareholders) and 109 of the Pakistan Penal Code (PPC), read with sections 3/4 of the Anti Money Laundering Act, against Tareen and his son.

The FIA in its complaints in the first FIR had stated that Tareen had fraudulently misappropriated shareholder’s money after his company — JDW group — transferred Rs3.14 billion to an associated private company identified as Farooqi Pulp Private Limited (FPML).

The FIR had stated that the private company was owned by his sons and close relatives. Additionally, it had said that Tareen, his son and another family member had purchased cash (US dollar) from the open market in Lahore in a “structured manner”.

The second FIR had said that “voluminous withdrawals amounting to at least Rs2.2bn were fraudulently and dishonestly made through a trusted cash rider”, and large amounts had been deposited into the personal and business accounts of Tareen and his family members.