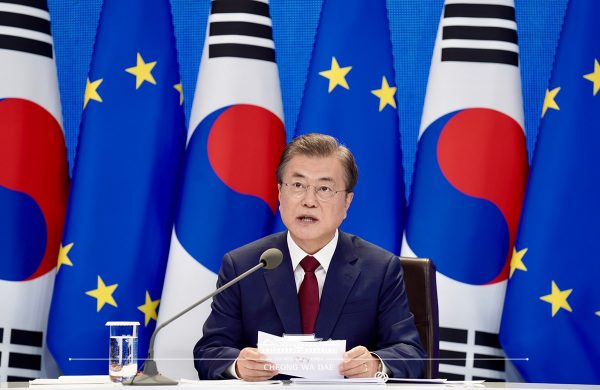 The security of the Korean Peninsula remains an important – and thorny – issue in global politics. Secretary of State Antony Blinken and Defense Secretary Lloyd Austin reiterated the U.S. commitment to protect South Korea from the North’s nuclear and missile programs during their first visit to Asia in March 2021. In Seoul, the U.S. and South Korea held the first “2+2” talks between their foreign and defense ministers after a five-year interlude. The United States is currently mending relations with South Korea after the U.S.-ROK alliance was put under strain by former President Donald Trump’s transactional approach to foreign policy. Under Trump, South Korea built up its military capabilities while also reaching out to other international partners, including the European Union (EU).

EU-ROK relations can be a valuable support for U.S. policy on the Korean Peninsula. The EU is stepping up its engagement in the region, widening and deepening its security relations with Seoul. The EU and South Korea have gradually developed their security ties, a trend that peaked when Trump was in the White House. The former president disrupted the United States’ traditional alliances, pushing Brussels and Seoul to reach out to each other independently from Washington.

The EU and South Korea have fostered bilateral security cooperation in four areas that have potential spill-over effects for Korean security and can help support U.S. policy in the region. They are: nuclear non-proliferation and disarmament; cybersecurity; space policy and technology; and preventive diplomacy and crisis management. This form of cooperation builds upon EU-ROK relations developed in the last decades.

The Evolution of EU-South Korea Relations

Relations between Europe and South Korea have increased in quantity and quality since July 24, 1963, when Seoul established official diplomatic relations with the European Community. The establishment of the European Union following the signing of the Treaty of Maastricht in 1992 and the democratization process that occurred in South Korea with the election that same year of Kim Young-sam, the country’s first civilian president in 30 years, opened up new possibilities for Brussels-Seoul cooperation. On October 28, 1996, the two sides adopted the “EU–Korea Framework Agreement” and the “Joint Declaration on the Political Dialogue,” transforming their relationship into a comprehensive cooperation system encompassing policy areas as various as trade, economics, culture, science, and technology.

During the 2000s, important domestic developments occurred in Europe and South Korea. The entry into force of the Treaty of Lisbon on December 1, 2009 gave the EU new foreign policy instruments and established the European External Action Service – Europe’s diplomatic service. In South Korea, democracy became firmly established with progressive presidents – Kim-Dae jung and Roh Moo-hyun – replaced by Lee Myung-bak, a conservative president committed to increasing South Korea’s visibility and influence in the global scene. These developments led the EU and South Korea to upgrade their ties to a strategic partnership in 2010.

The two sides signed a Free Trade Agreement (FTA), applied since 2011 and formally entering into force in 2015; a Framework Agreement covering political cooperation, which entered into force in 2014; and a Crisis Management Participation Agreement that entered into force in 2016. These agreements cover the key areas of politics, trade, investment, and security. They also offer the opportunity for further collaboration on North Korean issues. The EU has taken the lead in international efforts to promote human rights in North Korea and remains one of the only outside parties to maintain a continuous presence on the ground in implementing humanitarian assistance.

South Korea is the only country in the world to have the three abovementioned agreements with the EU – a Framework Agreement, a Free Trade Agreement, and a Crisis Management Participation Agreement – all having entered into force, highlighting the importance that the Brussels accords to its relationship with Seoul. Indeed, these agreements have served to establish or reinforce a host of bilateral dialogues on a wide range of issues, in particular in the areas of traditional security threats – such as non-proliferation and disarmament – as well as nontraditional security issues such as cybersecurity. The agreements have also allowed South Korea to join EU counterpiracy missions and crisis management operations. Brussels and Seoul are thus committed to improving their bilateral relationship in security-related fields of policy that now top the EU–ROK agenda.

Nuclear non-proliferation and disarmament cooperation is one of the cornerstones of the security relationship between South Korea and the EU. North Korea’s nuclear program and proliferation activities in the Middle East help to explain the interest that Brussels has in dealing with this issue. From a European perspective, Pyongyang’s nuclear activities are a threat to Europe as well as to South Korea and the international community writ large.

Starting from 2016, the EU has cooperated with South Korea on sanctions and the continuous implementation of the Proliferation Security Initiative (PSI). Cooperation between South Korea and the EU is underway on building a denuclearization roadmap, implementing confidence building measures, and strengthening control over strategic trade until the goal of denuclearization is achieved.

Another area where EU-ROK cooperation has made important advances is cybersecurity. This has important implications for both sides, especially in light of North Korea’s continued hacking attacks against both South Korean and European targets. The existence of a EU-ROK cybersecurity dialogue ensures annual discussions on various aspects of cybersecurity policy, laws, and norms, reinforcing common positions in multilateral and regional fora. Bilateral cooperation at different levels and between the various agencies that deal with cybersecurity issues in the EU and ROK has been developed, and proved fruitful, along with the development of joint cybersecurity exercises.

In 2018, the EU adopted a specific Communication on Enhancing Security Cooperation in and with Asia. Subsequently in 2020, South Korea was chosen for a pilot project on cybersecurity. The rather quick implementation of this pilot project led to bilateral cyber consultations in October 2020, covering the key topics of: (1) building resilient critical infrastructures in crisis; (2) building trust to prevent cyber conflict escalation; (3) managing the geopolitics of 5G; and (4) combatting cybercrime. The timing of the pilot project coincided with the 10th anniversary of the establishment of the EU-South Korea strategic partnership.

Another important area for cooperation – and the one enshrined in all major documents related to the EU-ROK strategic partnership – is space policy and technology, following a formal commitment to cooperation under the 2006 EU-ROK agreement on the joint development of Galileo, Europe’s global navigation satellite system. Today, there is a real convergence of interests in Europe to deepen the EU-ROK cooperation in the field of space technology, especially since South Korea appears to share a number of motivations, such as a global vision, the search for increased national and international security, the desire for diversified cooperation, and the progressive construction of civil space skills with an increasingly dual potential.

Europe and South Korea have significant capabilities in the space sector. Their policies share a predominant interest in civil, scientific, and economic activities, with a special focus on the monitoring of the Earth, the environment, and space. More broadly, the EU and South Korea seek to develop technological skills through innovation to secure their status and influence. The combination of these factors undeniably provides a framework for in-depth exchanges on the practicalities of cooperation in space matters from a broad security perspective.

The EU is on the top rung of all areas of space activities and has applied the field of outer space to other areas, such as internal and external security policy, including foreign policy. Since 2011, the EU regards space as a driving force to cement its position as a major player on the international stage, contributing to the Union’s economic and political independence.

In South Korea, the perception is that space policy is increasingly important, not only technologically, but also strategically. This change comes from the experiences gained through ROK–U.S. Space Policy Dialogues and South Korea’s involvement in the international discussions of emerging issues in space activities. Moreover, South Korea plans to launch and operate many satellites, including reconnaissance satellites, in the next few years, thus increasing the country’s space-based assets. The EU and South Korea are currently discussing ways to cooperate in satellite technology, as well as in space exploration projects led by the EU and/or the European Space Agency (ESA). To this end, Brussels and Seoul are about to establish a bilateral dialogue unique to space issues.

For both sides, there are benefits from cooperation on space technology and policy. In an environment as delicate as that of the Korean Peninsula, using different sources of information is an essential guarantee of security. Shared access to images, and especially the guarantee of distribution even in times of crisis, would represent a mutual advantage for Europe, which wishes to be involved in the maintenance of security in East Asia, and for South Korea, which would have access to complementary and independent sources.

A final area where EU-ROK cooperation can have an impact is preventive diplomacy and crisis management, following the signature of the Framework Participation Agreement, which offers South Korea the possibility to participate in EU missions. The agreement has so far led to the occasional participation of South Korea in EU NAVFOR, the anti-piracy operation off the Horn of Africa. The Framework Agreement also provides the legal basis for a more robust intervention by the EU and some of its member states in the Korean Peninsula, should the circumstances demand it.

EU-ROK cooperation could prove essential if and when a deal on North Korean denuclearization is reached. The verification and dismantlement process would require multilateral engagement including by EU powers as permanent members of the Security Council (France) and those who have expertise in this field (such as Sweden).

EU-South Korea security relations got a particular boost during the Trump presidency. While the content and modalities of their cooperation has varied – and may vary – over time, the general trends indicate that this form of collaboration between U.S. allies is here to stay and has potential to increase even under the Biden administration.

EU-ROK security cooperation, however, is not in competition with the U.S. system of alliances in Asia. On the contrary, it must be seen as an added value for Washington since it provides the United States and its Asian allies with additional tools for finding a solution to the question of Korean security.