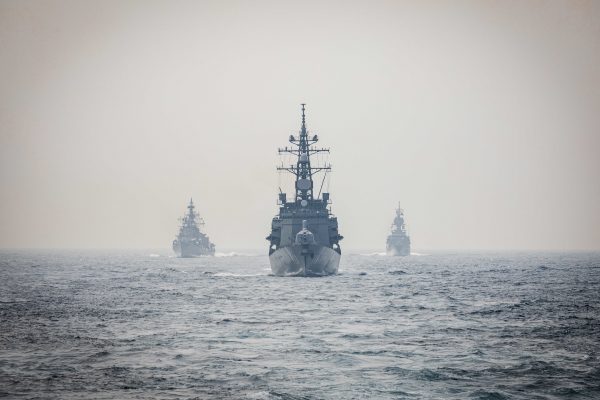 Just eight days before Joe Biden is inaugurated as president of the United States, the Trump administration declassified the strategy it purports to have followed in its policies towards Asia.

Called the “U.S. Strategic Framework for the Indo-Pacific,” the President’s National Security Advisor Robert O’Brien said that the “the document is being released to communicate to the American people and to our allies and partners, the enduring commitment of the United States to keeping the Indo-Pacific region free and open long into the future.”

The timing of the release seems more likely to be intended to pressure the in-coming Biden administration to perpetuate some of the Trump White House’s policies, or to burnish the professional reputations of national security officials tainted by Trump’s behavior and scandal.

Deputy National Security Advisor Matthew Pottinger, who oversaw much of the strategy’s development as the National Security Council’s senior director for Asia, resigned from the White House last week after a deadly pro-Trump mob stormed the U.S. Capitol.

Separate from the merits of these objectives, the Trump administration made little progress towards achieving any of them and made some situations much worse.

Trump’s often capriciously pursued trade war against China broadly failed and likely cost the United States economically far more than it did China, and for marginal, if any, strategic benefit.

The world is broadly much more skeptical of China’s global objectives and concerned about its illiberal and unchecked influence. However, this awareness and concern has been driven far more by China’s own behavior, such as its treatment of the Uyghur minority in Xinjiang, the political repression of Hong Kong, its economic punishment of Australia, and its abrasive “wolf warrior” diplomacy, than by U.S. leadership or policy.

The Trump administration’s legacy on the Korean Peninsula is much worse. After coming close to sparking a war with North Korea over the reclusive state’s nuclear weapons program in 2017, Trump engaged Kim Jong Un in a series of not very serious diplomatic summits that failed to produce any agreements. North Korea meanwhile unveiled a number of advanced new nuclear-capable missiles, including a giant intercontinental ballistic missile likely capable of hitting anywhere in the continental United States. Instead of bolstering its relationship with South Korea, the Trump administration repeatedly antagonized it with demands to pay the United States more money to support American troops stationed there, while also threatening to bring many of those forces back home and threatening South Korean car manufacturers with trade tariffs.

Instead of bolstering the United States’ economic leadership, the Trump administration presided over its retreat from the global economic order. In spite of China’s widespread economic coercion and disturbing violations of human rights, it has succeeded in leveraging international disappointment and skepticism of the United States from Trump’s policies to cement itself more securely into the global economy. Since Trump withdrew from the Trans-Pacific Partnership trade agreement, Southeast Asia assembled a new regional trade partnership with China, and the European Union concluded a new investment agreement with China over objections from incoming Biden officials.

The Biden administration now faces an even more fractured world from which it might try to assemble an international block against coercive Chinese policies.

The strategy names two military goals for deterring or prevailing against China in a conflict: to deny China air and sea dominance within the first island chain in a conflict, and for the U.S. military to dominate outside of the first island chain itself. Successful denial does not require military primacy or overmatch and the Pentagon’s own plans suggest that the primacy and overmatch rhetoric belie its more modest approach.

Contesting Chinese dominance inside the first island chain is why the U.S. Army is pursuing new long-range rockets and artillery and is behind the Marine Corps’ expeditionary island base strategy and purchase of mobile missile systems.

But even though these efforts align with the White House strategy, it is questionable whether the strategy is responsible for them. Most of those new weapons systems and warfighting concepts began being developed during the Obama administration and reflect geographic reality more than the Trump team’s strategic innovation.

If anything, primacy is even further out of reach after Trump’s four years in office than it was at the beginning. Despite coming in with promises of building a 350-ship fleet and successive plans for a 400 or even a 500-ship navy, the Trump administration never submitted a budget proposal to match its sound bites.

Incoming Biden administration officials appear skeptical that these more grandiose military goals are either affordable or necessary to balance China and protect U.S. interests in Asia.

At its best, the “Framework” reads as a collection of the United States’ enduring interests and policies in Asia grafted onto the outgoing President’s bombastic rhetoric and transactional worldview. The result was a strategy that could not achieve Trump’s own idiosyncratic goals and struggled to maintain the geopolitical position he inherited.