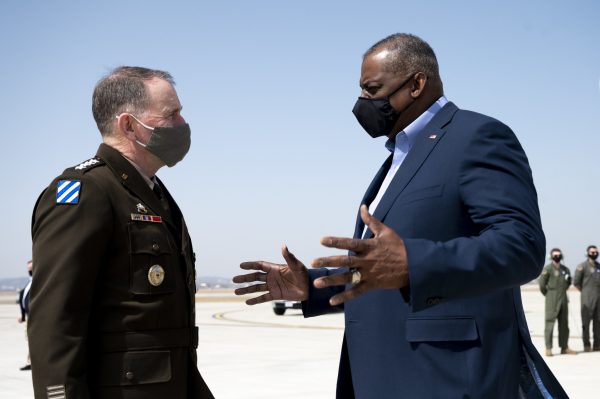 U.S. Secretary of Defense Lloyd Austin’s visit to Asia this week on his first international trip, including to India on Friday, gives some indication of the Biden administration’s strategic focus on the Indo-Pacific region. Speaking to the media, Indian Ambassador to the United States T.S. Sandhu remarked that “this visit is a reflection of the importance which the United States accords to India and the importance of our bilateral relationship.” The India leg underscores the importance of India-U.S. security and strategic ties within the Indo-Pacific security matrix.

According to media reports, Austin, who will be in India from March 19 to 21, will have meetings with his Indian counterpart, Rajnath Singh, and other senior government officials.  The visit will give a boost to the U.S.-India defense partnership and bring about greater synergy in framing a cooperative agenda in nurturing “a free, prosperous, and open Indo-Pacific and Western Indian Ocean Region.” The two sides will focus on ways to strengthen military-to-military engagement and bilateral defense trade, including industry collaboration. They will likely also discuss the evolving situation in Afghanistan. Indo-U.S. defense trade has grown manifold in recent years with the U.S. becoming one of India’s top defense suppliers. Media reports suggest a deal for 30 armed drones, 10 each for the army, air force, and navy, pegged at over $3 billion, is close to being approved by the Indian defense ministry. In November 2020, the Indian Navy acquired two Sea Guardian unarmed drones from the U.S. on a one-year lease. India has plans also to buy six additional P-8I long range maritime patrol aircraft in addition to the 12 already contracted.

Recognizing the need to weave a close web of security partners in the Indo-Pacific, a Pentagon statement on the upcoming trip said that the U.S. knows it needs “strong allies and partners and friends in that part of the world.” India being part of Austin’s first overseas trip sends a strong and clear message to China. Prior to his visit, Austin stated that the Asia trip is meant to further “credible deterrence” against China. He added that the United States’ goal “is to make sure that we have the capabilities and the operational plans… to be able to offer a credible deterrence to China or anybody else who would want to take on the U.S.”

The first leg of Austin’s trip will be to Japan and South Korea where he will be joined by Secretary of State Antony Blinken. Commenting on the first leg of his trip, Austin said that an important reason for his visit is to strengthen U.S. alliances and that Washington wanted to listen to the points of view of its allies and reassure them.

The Biden administration is likely to stay the course on the Trump administration’s tougher approach to China. But instead of the Trump administration’s unilateralist approach to foreign policy, Biden seems to want to work with a coalition of allies and partners, especially on China. During his visit to the Pentagon in February, Biden conveyed the message that the U.S. is “prepared to confront – and when necessary, militarily counter – a rising China.” Biden also announced the establishment of a new Defense Department China Task Force.  The Task Force is responsible for reviewing the U.S. approach to China in areas including strategy and force posture as well as technology and intelligence. Earlier in the month, Austin held the first meeting of the task force, which includes a mix of military commanders, civilian leaders, and members from the intelligence community. The task force is expected to complete its review in four months, but the reports and findings of the task force will remain classified.

Austin’s visit also comes against the backdrop of the first Quad summit, which was held virtually last week. The Quad, a grouping of Australia, India, Japan and the United States, has come a long way even since its second iteration took form in 2017. While analysts have sometimes characterized the grouping as an Asian NATO, the Chinese foreign minister predicted that it would dissipate like “sea foam.” Nevertheless, the Quad leaders meeting has possibly rattled China about the seriousness of cooperation among the four countries. The Chinese foreign ministry spokesperson in his briefing stated that “In the era of globalization, forming enclosed small cliques with ideology as the yardstick is the sure way to destroy the international order and after all, is unpopular and will end in total failure,” adding that “certain countries should shake off their Cold War mentality.”

The joint statement issued at the end of the Quad summit did not make a specific reference to China, but the message was unambiguous. It stated that the Quad “strive[s] for a region that is free, open, inclusive, healthy, anchored by democratic values, and unconstrained by coercion.” It went on to highlight a commitment for “a free, open rules-based order, rooted in international law to advance security and prosperity and counter threats to both in the Indo-Pacific and beyond.” The statement also said the foreign ministers and senior officials from all the four Quad countries will continue to meet and converse on a regular basis and that the Quad leaders plan to have an in-person meeting at the end of the year. Of course, the Quad foreign ministers have met a few times including an in-person meeting in Tokyo in October last year.

For the time being, the fears and wariness that Biden would be soft on China or indifferent toward mechanisms such as the Quad can be put to rest. While there are stylistic changes in the U.S. approach in terms of moving to build a larger coalition of states to address the China challenge, the latest Quad leaders meeting and the defense secretary’s visit to Asia would appear to be reinforce the strong U.S. commitment toward the Indo-Pacific.