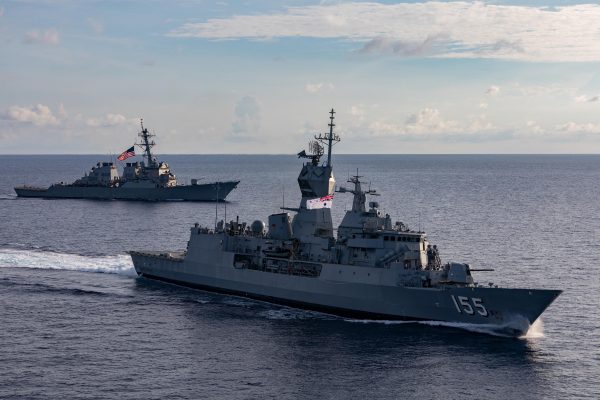 The U.S. destroyer USS John S. McCain challenged Russian claims to Peter the Great Bay in the Pacific on November 26. The Russian press claims that one of its destroyers expelled the U.S. ship from the area under threat of ramming.

Historically, the United States has rarely publicized Freedom of Navigation Operations (FONOPs) or provided more than general acknowledgement of them. In 2020, however, the navy has given more specific details about the location and rationale for its FONOPs in the Pacific. By sailing through waters that the U.S. believes another country claims greater rights or control over than what the U.N. Convention on the Law of the Sea (UNCLOS) permits, it helps prevents customary recognition of the excessive claim.

According to the U.S. Pacific Fleet, the McCain’s FONOP challenged Russia’s claim of sovereignty over Peter the Great Bay, a large bay on the Sea of Japan that stretches a hundred miles across. Vladivostok, home to Russia’s Pacific Fleet, is situated on the bay.

UNCLOS allows the entirety of some large bays to be claimed as territorial waters depending on their shape and so long as their mouth is not more than twenty-four nautical miles wide. There are also allowances for bays that a country has longstanding, recognized historical control over.

The Soviet Union made a historic claim over the waters of Peter the Great Bay in 1984. The bay is too large to be claimed under normal rules and the U.S. government has never recognized the Soviet, and now Russian, claim to historical control over it.

Russia’s TASS news agency reported that the McCain violated Russia’s claimed maritime boundary by two kilometers and that the U.S. vessel was stopped from further incursion by a Russian destroyer.

The Pacific Fleet’s Admiral Vinogradov anti-submarine destroyer used an international communication channel to warn the foreign vessel that such actions were unacceptable and the violator could be forced out of the country’s territorial waters in a ramming maneuver. After the warming was issued and the Admiral Vinogradov changed its course, the USS John S. McCain destroyer returned to international waters.

The U.S. Pacific Fleet denied this claim that the McCain was forced out of the area. “The Russian Federation’s statement about this mission is false. USS John S. McCain was not ‘expelled’ from any nation’s territory. McCain conducted this FONOP in accordance with international law and continued to conduct normal operations in international waters,” the statement said.

The USS John S. McCain returned to service this summer, nearly three years after a deadly collision with a chemical tanker off the coast of Japan killed ten sailors and caused extensive damage to the warship.

The Admiral Vinogradov made news last year after conducting unsafe maneuvers around a U.S. cruiser that was landing a helicopter in the Philippine Sea, forcing it to take emergency actions to avoid a possible collision.