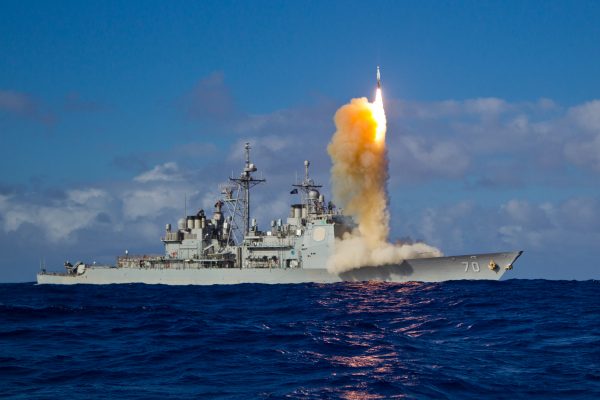 The United States has intercepted and destroyed an unarmed intercontinental ballistic missile (ICBM) during its midcourse flight in space using an interceptor fired from an Aegis ballistic missile defense (BMD) destroyer, in a first such test on November 16. Reuters and other news outlets quoted U.S. Missile Defense Agency (MDA) Director Vice Admiral John Hill as saying “We have demonstrated that an Aegis BMD-equipped vessel equipped with the SM-3 Block IIA missile can defeat an ICBM-class target,” going on to add that this capability could boost the Ground-based Midcourse Defense (GMD) system. The test marks an important milestone in the United States’ pursuit of BMD.

According to a U.S. Army document on the GMD, “it currently protects against the threat of limited intercontinental ballistic missile (ICBM) and intermediate-range ballistic missile (IRBM) attacks. GMD relies on ground-based interceptors (GBIs) based at Fort Greely, Alaska and Vandenberg Air Force Base, California.”

The SM-3 Block IIA missile has been jointly developed by Raytheon Technologies and Japan’s Mitsubishi Heavy Industries Ltd. It is the third in the family of the Standard Missile 3 “hit to kill” interceptors, the other two being the land-based SM-3 and the SM-3 Block IB interceptors. According to a Raytheon website, the SM-3 Block IIA interceptor has larger rocket motors as well as a larger kinetic warhead than the other two and carried out its first live target test in early 2017. “The system participated in an international, NATO-led exercise in 2019 that simulated real-life threat scenarios,” the website notes, adding that the Block IIA is the “centerpiece of the European missile defense system” and will be deployed ashore in Poland.

In August, Defense News noted the importance of the Block IIA interceptor in a plan for a layered homeland BMD system in face of ICBM threats, which would also include an Aegis Ashore system in Hawaii as well as Terminal High Altitude Area Defense (THAAD) system.

“The SM-3 family of ballistic missile defense interceptors has executed more exo-atmospheric intercepts than all other missiles combined and is the only weapon of its kind employed from both ships and land,” a Raytheon statement on the November 16 test has noted.

While BMD plans have a long and checkered history – including President Ronald Reagan’s Star Wars plans – it received a fillip with the Bush administration’s exit from the 1972 Anti-Ballistic Missile Treaty in December 2001. While President Barack Obama campaigned against missile defense, and his administration announced a $1.4 billion dollar cut to the MDA’s budget in 2009, he also left a significant BMD legacy, analysts have argued, which has included the deployment of THAAD in Guam in April 2013 and the European Phased Adaptive Approach toward missile defense in Europe. The Trump administration enthusiastically promoted BMD especially in face of North Korea’s ICBM capabilities. It released a BMD Review last January which directed the Department of Defense to investigate the possibility of the Block IIA interceptors against ICBMs, something that stands as a proven possibility with the November 16 test.

However, many analysts and scholars argue that the United States’ pursuit of a layered BMD system is what is providing the impetus for countries like Russia and China to pursue hypersonic missiles which are extremely hard to intercept, along with other technologies that secure a second-strike ability. In an interview with The Diplomat last month, MIT professor Vipin Narang had noted that “The pursuit of hypersonics is again driven by the unfulfilled fantasy of working national missile defenses,” along with the pursuit of multiple independently targetable reentry vehicles (MIRVs) by countries like China.