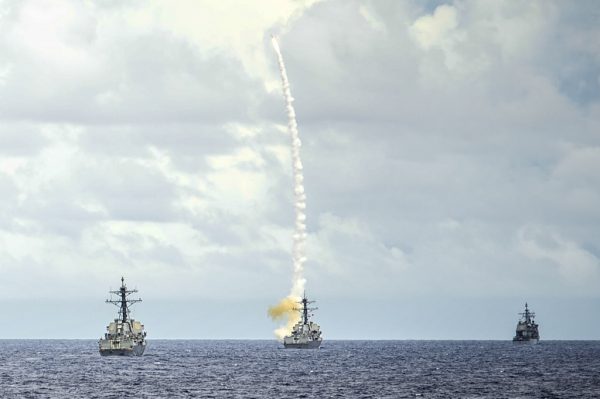 The outgoing U.S. Navy Secretary Kenneth Braithwaite has announced that the navy should create a new fleet within the Indo-Pacific theater. Speaking at the Naval Submarine League’s annual symposium on November 17, Braithwaite has suggested that the proposed First Fleet will take some load off the U.S. Seventh Fleet. The USNI quoted Braithwaite as saying, “We want to stand up a new numbered fleet. And we want to put that numbered fleet in the crossroads between the Indian and the Pacific oceans, and we’re really going to have an Indo-PACOM footprint.”

The Seventh Fleet is based out of Japan and has as its area of responsibility (AOR) the maritime space between the International Dateline to roughly the India-Pakistan border, where the Indo-Pacific combatant command’s AOR ends. The San Diego-based Third Fleet’s AOR ranges from the western coast of the United States to the International Dateline. The Third and Seventh Fleet, along with supporting submarine, naval aviation and naval surface forces, make up for the U.S. Pacific Fleet.

“We can’t just rely on the 7th Fleet in Japan. We have to look to our other allies and partners like Singapore, like India, and actually put a numbered fleet where it would be extremely relevant if, god forbid, we were to ever to get in any kind of a dust-up,” USNI quoted Braithwaite as saying. While Braithwaite suggested that he hadn’t brought up the proposal with Acting Secretary of Defense Christopher Miller, a defense department official told USNI that Braithwaite had discussed it with former Secretary of Defense Mark Esper who has acquiesced to the plan. Esper was fired by President Donald Trump on November 9, just six days after the U.S. presidential elections which saw Trump’s defeat.

Braithwaite’s proposal has already raised more questions among analysts than it has provided answers. On social media, many U.S. Navy watchers have pointed out the tentativeness of the suggestion, including lack of clarity around where the First Fleet would be headquartered. He had suggested Singapore, though adding “if not Singapore right out of the chocks, we’re going to look to make it more expeditionary-oriented and move it across the Pacific until it is where our allies and partners see that it could best assist them as well as to assist us,” leading analysts to conjecture the possibility of the fleet being based out of Australia. Others have noted that a new numbered fleet simply adds to personnel costs, and only makes sense if it is accompanied by an addition of new ships.

Analyzing the shortfalls of the proposal on Twitter, Blake Herzinger acerbically noted: “In the last two months of an administration defined by haphazard, uncoordinated policy, they drop a bomb like this that will inevitably cause partners to pull back publicly. This administration doesn’t have the juice to make it happen anyway.” Over the past month, during his Asia trips, Secretary of State Mike Pompeo’s frontal attacks on the Chinese Communist Party (CCP) – as well as his very vocal assertion that the Australia-India-Japan-U.S. quad is a tool to manage threats posed by the CCP – has left even governments friendly to the Trump administration dismayed.

However, given that President-elect Joe Biden’s presumptive nominee for the secretary of defense position, Michele Flournoy, is also seen as a China hawk in favor of a robust stance against the People’s Liberation Army Navy, the idea of the First Fleet may very well carry forward to the next administration.

Some Indian analysts and former naval officers also approach Braithwaite’s proposal with cautious optimism. Speaking to The Diplomat, retired Commander Abhijit Singh noted that while India would welcome a greater U.S. presence in the Indian Ocean, especially if it helps with capacity building in smaller third countries, the First Fleet, if it were to eventuate, “would concern some people in the establishment” given that it would act to detract from India’s self-identified position as the preeminent Indian Ocean regional power. Singh, who now heads the Maritime Policy Initiative at the Observer Research Foundation, a New Delhi think tank, added that a greater U.S. naval presence in the region in the long run would also signal that India is “no longer the principal security provider” in the region, which had been the U.S. expectation especially since India’s role as a first responder in the 2004 Indian Ocean tsunami. Given that the Indian Ocean forms the Indian navy’s interior lines (and China’s exterior), it “doesn’t need the U.S. navy to wage war” on behalf of India, Singh noted, and so an additional U.S. numbered fleet in unlikely to make much difference to India militarily.

In the very recent past, India has welcomed a much larger role for the U.S. in its own backyard, including welcoming the U.S.-Maldives military agreement inked in September. And, as Singh noted, the U.S. has been very careful in not undermining India’s influence in its own backyard. That said, India has also welcomed Russia into the Indian Ocean region, with Prime Minister Narendra Modi floating a proposal for a Vladivostok-Chennai maritime route last year. An India-Russia military logistics agreement is also under discussion. To what end does a greater U.S. presence in the Indian Ocean – through a new numbered fleet, for example — square with Indian partnership with a power inimical to the U.S. remains to be seen.