Popular actor, director and writer Yasra Rizvi, came under the limelight recently for sharing a photo that revealed she is pregnant.

The photo was from the sets of a project she is currently directing. The Churails and Dunk star’s baby bump was hard to miss, as she caressed it while reading the script of the show she has been sharing snippets of since a while now.

Taking to Instagram, she captioned the first photo: “To deliver or not to deliver?” And under the second share she wrote, “Waiting for the monitor. P.s. waiting is half the job and patience is the only way to get it done!”

But as news of her pregnancy went viral, Rizvi, in a now deleted Instagram story, wrote: “In our country, the news worthy bit is that I’m pregnant. Not the fact that I am also directing probably the most important script that I have gotten to direct so far while [I’m] due anytime now #workingwomen #BeeGul.”

She went on to reinstate that we, as a nation, are obsessed with marriage and one’s ability to procreate. 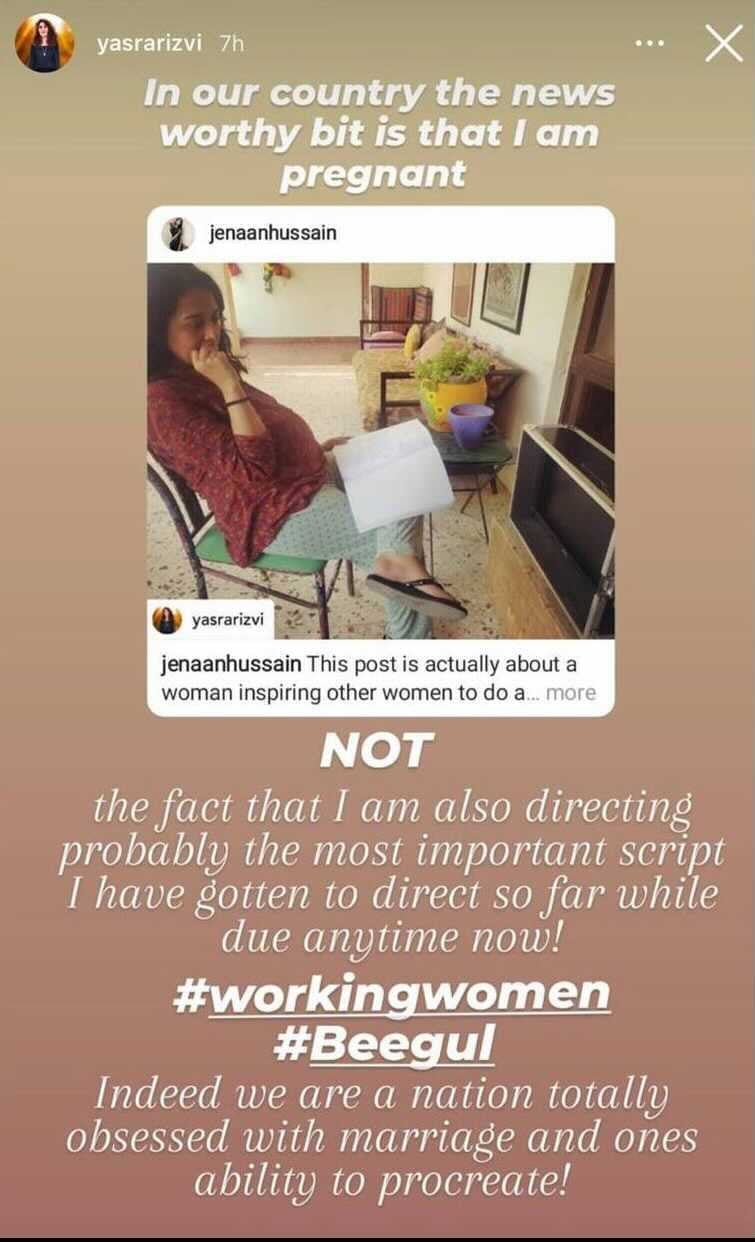 In another post, Rizvi had highlighted how everything she delivers in terms of her work is a product of complete submission, provided that she prioritises it most, irrespective of her domestic inhibitions or duties. “Sometimes for days I just sit and do nothing but my effort benchmark while at work is very high. It IS do or die for me, which becomes its own kinda difficult to work with. But I am just that creepily into the task at hand hence under the influence. It takes over everything and only in that surrender, am I able to do what I do – good or bad – it is a product of complete submission,” she wrote.

And for the well-wishing fans who may have taken her complaint personally, Rizvi clarified that she is not against people sending her prayers. Although, her story made it abundantly clear that she was disappointed that the news of her pregnancy overshadowed what should have been the news of her ongoing project.

Rizvi tied the knot with Abdul Hadi in 2016. The actor was shamed for marrying someone much younger than her, following which she lambasted trolls in a short video clip. The actor said, “I want to thank the ones who criticised me and the ones who supported me, because it (my marriage) has started a debate on the age gap between a couple and where the issue stands socially and religiously.”

Have something to add to the story? Share it in the comments below.