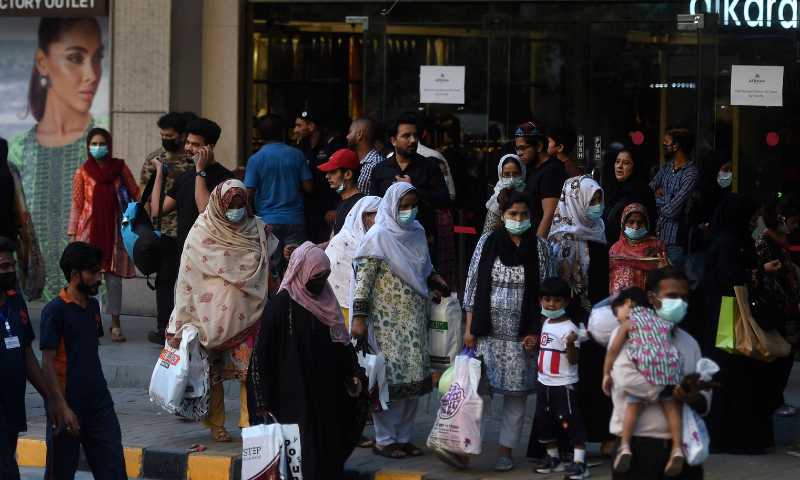 ISLAMABAD: With no let-up in Covid-19 casualties and cases, the National Command and Operation Centre (NCOC) on Saturday decided to ban all processions in connection with Yaum-i-Ali. However, majalis have been allowed under strict standard operating procedures (SOPs).

On the other hand, as the Brazilian and South African variants continue to be reported in Pakistan, Special Assistant to the Prime Minister (SAPM) on Health Dr Faisal Sultan urged people to get themselves vaccinated at the earliest.

According to the NCOC data, 146 people succumbed to the virus while 4,696 got infected throughout the country in a single day.

An important session on Yaum-i-Ali was held at the NCOC, which was presided over by Minister for Planning, Development and Special Initiatives Asad Umar and co-chaired by National Coordinator Lt Gen Hamooduz Zaman Khan.

“Keeping in view the risk factor due to ongoing surge in Covid-19 cases across the country and particularly in major urban centres, it was decided to ban all sort of processions while holding of Majalis has been permitted under strict SOPs which are already in place for Ramazanul Mubarak,” a statement issued by the NCOC said.

The statement went on to say that the forum had emphasised the need to engage religious scholars and community leaders at provincial and district levels for implementing these decisions.

Meanwhile, in a video statement, Dr Faisal Sultan said all viruses evolved with the passage of time, resulting in the emergence of new strains.

“Some time ago a strain was reported in the United Kingdom and it was named B.117. It spread to a number of countries, including Pakistan. In the same way, a variant was reported in South Africa, called B.1.351, and another in Brazil named P.1. A number of other strains are also being reported in various countries. However, B.117 has a high transmissibility rate compared to other variants,” he said.

Responding to frequent queries about the effectiveness of vaccines against new strains, the special assistant said: “All vaccines available in Pakistan are effective and people should go for them to save themselves from hospitalisation.”

On the other hand, the Ministry of National Health Services (NHS) spokesperson, Sajid Shah, said his ministry and the NCOC were monitoring Covid-19 variants on a regular basis.

“As a result of this proactive effort, one sample of the SARS-COV-2, B.1.351, (South African variant) and another sample of SARS-COV-2 P.1 (Brazil) were detected in the National Institute of Health through genome sequencing. Authorities are actively engaged in tracing contacts of these positive cases,” he said.

The spokesperson further said: “Regardless of which variant has been detected, SOPs recommended globally continue to be our first line of defence against coronavirus. Please ensure that you wear a mask, practice social distancing and do not leave your home unnecessarily.”

He said everyone over the age of 40 should register and get inoculated as per government guidelines.

Meanwhile, the NCOC had announced that inbound air traffic would operate at 20pc of the total current quantum. All passengers were bound to provide negative Covid-19 PCR test result, which should not be more than 72 hours old.

According to the NHS ministry spokesperson, “rapid antigen tests will be held on arrival and negative cases will undergo a 10-day self quarantine at home. Positive cases will be shifted by district administrations to self-paid facility for 10-day quarantine and second PCR test will be conducted on the eight day of the quarantine.”

“In cases of positive results, the patient will undergo additional quarantine or hospitalisation as per the advice of the health authorities,” he added.

“All inbound travelers will be registered on Passtrack App before traveling to Pakistan, however, deportees will be exempted from registration,” he said, adding that the NCOC would review the advice on May 18.

The official said the forum had also proposed reducing domestic flights to limit chances of the virus from spreading.

The NCOC, meanwhile, reported 146 deaths and 4,696 new cases in a single day. As many as 671 ventilators were in use across the country while the number of active cases reached 90,553 on May 1. Overall 6,639 patients were admitted to hospitals.

Moderna vaccine for emergency use

The World Health Organisation (WHO) has listed Moderna Covid-19 vaccine (mRNA 1273) for emergency use, making it the fifth vaccine to receive emergency validation from the health body.

According to a statement, the WHO’s Emergency Use Listing (EUL) assesses the quality, safety and efficacy of Covid-19 vaccines, which is a prerequisite for Covax facility vaccine supply.

It also allows countries to expedite their own regulatory approval to import and administer the vaccines.

It is worth mentioning here that Covax has pledged free vaccine for 20pc of the population of Pakistan.