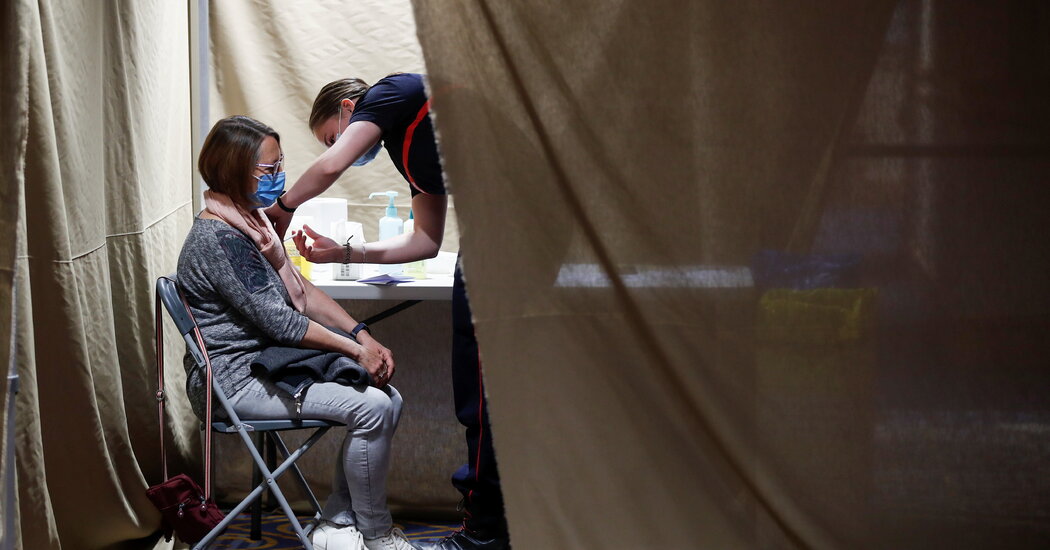 How Europe sealed its Pfizer deal

The E.U. will finalize a deal this week for 1.8 billion doses of the Pfizer-BioNTech Covid-19 vaccine, after a striking alignment of personal diplomacy, political survival and corporate hustle.

For a month, Ursula von der Leyen, president of the European Commission, exchanged texts and calls with Albert Bourla, chief executive of Pfizer. Then, finally, a breakthrough: Pfizer might have more doses it could offer the bloc — much more. And the E.U. would be thrilled to have them.

Details: The contract will permit the E.U. to resell or donate the vaccines to partners, empowering the bloc to conduct vaccine diplomacy and to support struggling efforts to immunize people in poorer countries.

A small but growing number of Israeli and international watchdogs have come to a conclusion that many Palestinians reached long ago: that Israel is perpetrating a form of apartheid, the racist legal system that governed South Africa until the early 1990s.

On Tuesday, Human Rights Watch released a report arguing that Israel has pursued a policy of ethnic supremacy that favors Israeli Jews over Palestinians in both Israel and the occupied territories.

The policy, which was once considered temporary, has over time hardened into a permanent condition, said Kenneth Roth, the group’s executive director. The Israeli government has condemned the report as a baseless attack.

Analysis: “While much of the world treats Israel’s half-century occupation as a temporary situation that a decades-long ‘peace process’ will soon cure, the oppression of Palestinians there has reached a threshold and a permanence that meets the definitions of the crimes of apartheid and persecution,” Roth said.

‘Because I am a woman’

Speaking to the European Parliament on Monday, Ursula von der Leyen, the European Commission president, described her hurt and frustration after she was left standing during a meeting in Turkey this month. Her colleague, a man, as well as the president of Turkey, also a man, took the only two chairs set out for the official talks.

“Would this have happened if I had worn a suit and a tie?” said von der Leyen, who is the commission’s first female leader. “In the pictures of previous meetings, I did not see any shortage of chairs. But then again, I did not see any woman in these pictures, either.”

She said that she had found no government protocol that could explain why she was treated this way — she and her male counterpart rank equally in the European Union’s hierarchy. “So, I have to conclude, it happened because I am a woman.”

Watch: A video of the meeting, held at the Turkish presidential palace, shows von der Leyen’s clear surprise at the lack of appropriate seating. The images caused a storm on social media. #GiveHerASeat soon started trending on Twitter.

The idea is deeply unpopular: Older people say they will be cheated of their promised timelines, while younger people worry that fierce competition for jobs will intensify. Workers with physically demanding jobs say they’ll be worn down, left unemployed — or both.

It feels very American to turn the vaccine rollout into a branding spectacle rooted in the worship of pharmaceutical companies, writes my colleague, the critic Amanda Hess. This is an edited excerpt.

For months, social media has been operating as if mass death and collective trauma could be processed (or at least ignored) by rigorously serving up topical memes on our phones. Now, the long-running Covid dramedy appears to be nearing its finale, in the form of an orgiastic flurry of vaccine content.

Images of filled-out vaccine cards are status symbols. The syringe emoji is spurting everywhere. There are vaccine fan-fiction TikToks where the pharmaceutical brands are spun into whole personalities, and playlists full of parody songs like the sex romp “Vaccinated Attitude” and the “Saturday Night Live” groove “Boomers Got the Vax.”

And the array of vaccine brands, each with their own protocols and typical symptoms, has made room for them to be interpreted as an internet-wide personality test, with all the irrational identification of an astrological sign or a BuzzFeed quiz.

When a young TikToker called @idrinkurmilkshake winkingly identified herself as a member of the “Pfizer Gang,” she kicked off a joking rivalry that tore ebulliently through the internet. “Umm, only hot people get the Pfizer vaccine,” she said, smugly tucking a gleaming curl behind an ear. “If you got Moderna, then I don’t know what to tell you, queen.” (When she later uploaded her audio to the app so other users could lip-sync to her voice, she clarified her stance by titling the track “imjusykiddingyouareallhot.”)

That’s it for today’s briefing. See you next time. — Natasha

P.S. Our Opinion section announced a lineup of 16 contributing writers including Zeynep Tufekci, who writes about the social impacts of technology.

The latest episode of “The Daily” is on U.S. climate credibility.

You can reach Natasha and the team at briefing@nytimes.com.